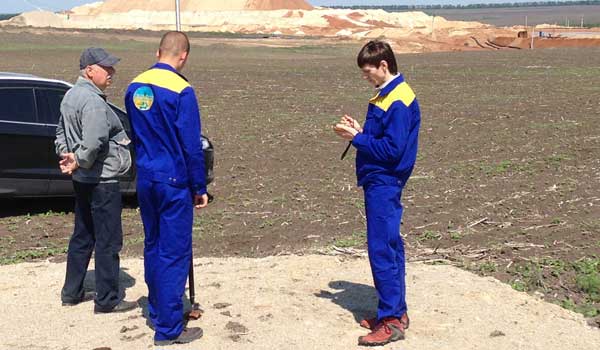 Recent years, physicians and environmentalists draw attention to the fact that people are exposed to natural sources of ionizing radiation inside dwellings and industrial buildings. Roads, houses and many modern apartment decorated with natural stones are used everywhere - natural materials. Natural radioactive substances in building materials, of which buildings are made, are the source of such ionizing radiation. Established strict standards for levels of harmful substances in the materials used for the construction. Therefore, dosimetric control are places of extraction of raw materials and building materials made from this raw material. Also controlled by the constructed building.

Raw materials for production of building materials is developed on the deposits. Before the field operation, during the production of intelligence, studied the number of radionuclides in the proposed mining of the soil. Developed special rules and regulations of study fields, depending on their Geology, the size assumed for the development of raw materials. the Radiation-hygienic assessment of the field includes a radiation survey, monitoring, sampling for laboratory testing. Devices, is monitoring, pass state verification. At the last calibration the instrument shall be issued a certificate that indicates its shelf life. Samples for study of radioactivity take throughout the site, the intended prey.

monitoring of necessary during the execution of works on ecology, which will determine and assess the consequences of entry of this object in operation. Development of the facility and removal of contaminated materials can affect the environment and the possible results of this effect should be explored in advance. The materials according to the number of the containing radionuclides are divided into 3 classes. It is crucial for the possible application of materials. For example, the scope of low-radioactive materials first class unlimited. Dosimetric control is a clear distinction between what can be constructed from this raw material, and what is not. The materials assigned to the third class, are used mainly in road construction outside the settlements.

the place of production of raw materials are divided into three groups. The first group includes those deposits that are composed entirely of low radioactive rocks of the first class. The second group consist of deposits, folded rocks of the first class with lenses and lots of rocks the average radioactivity of the second class and the higher radioactivity of the third class. The third group consists of fields, represented by the rocks of the second and third class. As field development subject to annual monitoring. Such monitoring can identify areas of occurrence of soils with a high or low radioactivity. You must also confirm the class of raw materials on sites, which are planned production. So the work in this area is conducted on a regular basis.

the monitoring of the destiny of professionals, who are employees of the company company ", GeoTop Engineering".