title>Executive survey of the facade 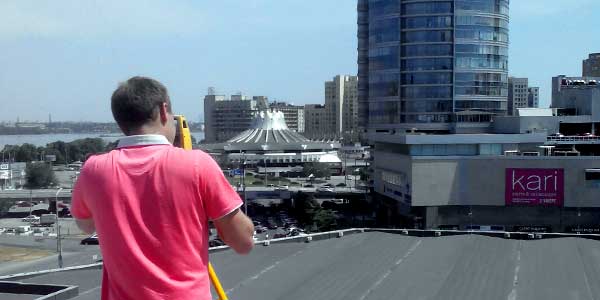 Among the entire list of services done by our company, is one of the hottest Executive survey. It is performed for various purposes. It is conducted upon completion of each phase of installation and construction works. This survey allows us to determine the deviation of the delivered project in nature from the project documentation that were made during construction. According to the results of such work are presented relevant material referred to as - built documentation. It can be made either on paper or electronically.

Another service provided by the company " Guild Engineering", is a built survey of the facade. It is very common, as it allows to get maximum information about the altitude and the planned position of the facade elements, as well as about his size. In other words, front-advance drive mode allows a detailed and accurate picture of the studied façade. During this survey almereyda investigated object, captures the images of the characteristic points of the facade. Such points include the lifting columns, stained glass Windows, different floors, the overall verticality of the building, etc.

the Need for front shot appear when developing the project of reconstruction of buildings and structures, to compute the area of the facade, for estimating of materials that have been spent on the decoration of the building. The important role played by Executive survey when designing the façade of the energy saving programme.

Executive survey of the facade performed in several steps:

Executive survey of the facade is performed by a special survey equipment, electronic total station. It allows you to obtain the most accurate data, and the work thus carried out much faster. Often, drawings like this have a front shot scale from 1:50 to 1:200, but there are exceptions when the customer requires them another scale.

Executive documentation should include data on the facade:

based On the data obtained during the built survey of the facade, in addition to drawings are 3D models of buildings, sections and cross sections. Three-dimensional model allows to see in detail all the necessary information about the object. In other words, it transmits an exact copy of the object.

after as-built survey of the facade we provide our clients with such documents: