Geodetic works on the construction site 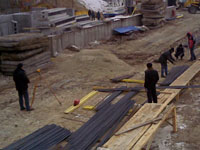 due To the modern nature of the conduct construction (the shortest possible time constrained conditions, the clock works) is a very important component of adherence to established the pace is fast and high-quality geodetic support.

Thanks to modern equipment and many years of experience and mobility of our professionals, we are ready to perform any assigned geodetic task within the specified time, in any weather and time of day, and accompanied by several of Your objects at the same time. 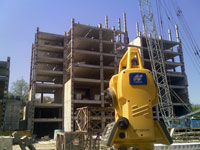 Our organization produces geodetic work on site to ensure correct placement of construction projects in the plan with respect to its geometry, the specified accuracy and the requirements of construction norms and rules.

Surveying work on the site can be divided into several categories:

the Final estimated cost of the services is individual and depends on many factors such as the size of the plot works, the term of the project, the objectives of surveying, location, terrain...

The most important is the center piece of geodesy at the construction site.

Often perform landing building at the new site according to the General plan trust only experienced professionals. If the master plan was completed in urban tablets, binding future of corners in the plan it is advisable to specify in the city coordinates, so the first thing you need to create a geodetic control network for construction sites, first in the city's coordinates, and then for convenience, convert it to local conventional coordinate system for each building or for the whole complex of buildings facilities, utilities, etc. If the master plan key bindings for surveyors indicated from existing buildings, you still need to first make carrying out of the boundaries of the site, to create a local coordinate system, and then primerate main dimensions to the building set dimensions climbed to the platform, thus we test project for geometric errors.

Then from the main axis is the breakdown of all elements of the construction site in stages:

during construction and after its completion surveyors measure all these ready newly constructed elements, draw diagrams and compare them with the project. On the basis of measurements made decisions about the quality the constructs.

Sometimes even the highest quality metering responsible constructs and elements requires re specialist with finished drawings as-built drawings for explanation of the situation on the construction site to the foremen and masters, as not every Builder can read geodetic Executive. They geodetic worker indicates deviations of columns, walls, foundations in the plan, as well as the actual dimensions between columns. As the diagrams indicate the elevation at the measuring points. When the specialist is on the hands of the Executive scheme he may direct the columns indicate the problem areas even without special equipment by using a token for their timely correction.

the Most time-consuming part of geodetic works on the construction site are earthworks. In these works has its own peculiarities, such as:

So the code on the site ends of the earth and begin the foundations, the surveyor is already there than to put the device to pin point, to cause the axis.

On the foundations have to be geodetic survey (on average half a day.

Then begin when the walls and ceilings surveyor required on site in just 1 hour per day. As the site has already established a large base points, reference points, many axes imposed on all columns and walls. For an hour he decided how to lay out new walls and ceilings, and poznati ready, removed from casing.

throughout the construction phase is collected archive of Executive surveys, inventories of sites of contractors, there are designs on the subject of displacement, deformation, verticillata and horizontalmente.

With us, Your construction site will always be geometrically smooth, correct form and in a timely manner marked, which will be composed of all relevant regulations and permits.