Geodesy and Geology at stadiums, airports 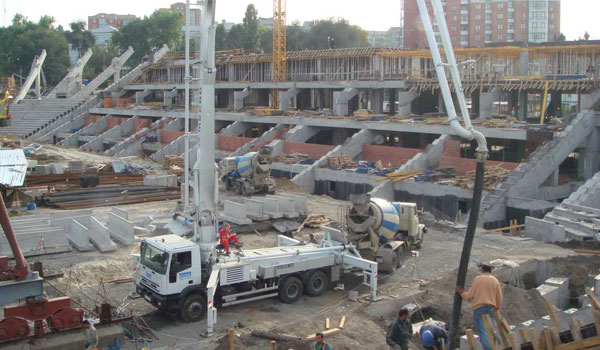 a Large number of stadiums and airports in the country today are in need of reconstruction and modernization. To the period of the championship of Europe on football Euro-2012, among others, prepared Donbassarena, Dnipro, and Boryspil airports.

Dnipropetrovsk football stadium can accommodate over thirty thousand spectators. It was erected on the site of the old stadium. The relief is rather complicated, the elevation at the site is 15-20 m. From October 2005, with the approval of the main part of the project, the stadium construction began and continued until September 2008. An integral part of this work was geodesy for the construction of the stadium. Installation of metal structures for installation of shelter, construction of 4-storey building with numerous offices and office space, changing rooms, conference facilities, lodges for press and VIP guests, a restaurant and a commentator booths demanded attention from the surveyors. Were marks removal, leveling surfaces, breakdown and Executive surveys. Now “center” is part of the infrastructure of the club "Dnepr".

Stadium "Donbass arena” is the first stadium in the elite category, which was designed and built by all standards of UEFA in Ukraine and Eastern Europe. the Geology for stadium construction had to give the data for the project design and calculation of foundations. It was necessary to design the underground Parking. For the process of trench calculated mass haul volumes. In the process of preparing of the pit was excavated about 460 000 cubic meters of soil. Scored 3248 piles. During Assembly of reinforced concrete structures was carried out permanent geodetic observation. Spatial multi-ton trusses of the roof (the weight of each is approximately 60 tons) require accurate installation. Many engineering systems of the stadium were built and filmed. Only cable was laid 1,200 km.

Geodesy for the construction of the stadium included a topographical survey and 25 hectares of parkland. As a result of the natural decrease and increase the relief well is used. The most interesting object of landscape design - Garden stone - covers an area of 2300 sq. m.

the Company LLC “the Guild Engineering” participated in the construction of stadiums “the Dnipro-arena", "Donbass arena”, the reconstruction of Dnepropetrovsk and Boryspil airports.