Dnieper-Donetsk basin is confined to the s-e part of Ukraine. The relief is low. The hills are composed of Sandstone, chalk, limestone. Many rivers – the Seversky Donets, Oskol, etc., Modern relief remained after the glacier. He is survived fluvioglacial sediments. The geological structure of the territory of the Dnieper-Donets basin from the point of view of geomorphology is determined by finding: W – Polissia lowland. With-In –  Russian platform. The South-Eastern part of Donetsk upland. But the main area covers the Dnieper lowland. 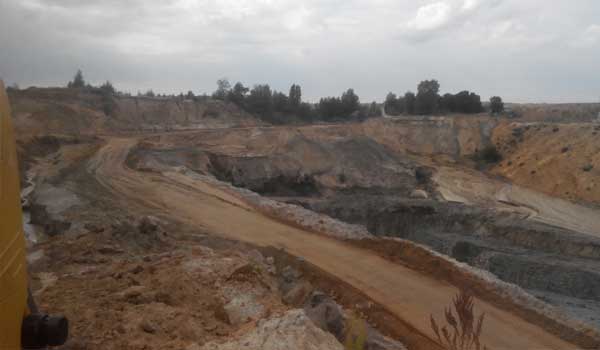 geological structure of Dnieper-Donets basin marks the deep Foundation. Sedimentary rocks (h= 4-6km in the center of the basin up to 20 km). Under chetvertichnoe are the formation of Paleozoic, Mesozoic, Cenozoic Sandstone, dolomite, limestone, chalk, shale. Power Devonian of precipitation – more than 4km, carbon – 3.7 km Mesozoic – a little less than 2 km, Paleogene – 250m, Neogene – 30m. Common  sand, clay, Sandstone, marl Palaeogene. Top Paleogene, and Neogene rocks are sandy sediments (alluvium), fluvioglacial formation, moraine, loess-like loam. Geological structure and relief of the Dnieper-Donets basin have communication with each other. There is a pattern of development kainozoiskikh of sediments of different Genesis. Each species is confined to the appropriate relief. Forest is mostly confined to the watersheds, and ancient river valleys. Compose the alluvial deposits of river terraces. The power of Cainozoic deposits can reach from the meter to 50m.

geological structure of Dnieper-Donets basin presents a predominance of Paleogene and Neogene. In Kharkiv and Donetsk regions very well developed carbonate formation. They can easily develop karst process. The more that sediments are exposed near the rivers. the geological structure of the territory of the Dnieper-Donets basin in Northern and Western areas associated with alluvial terrace, forest, bog plains. More than half of the territory (center, W, s) is decreasing alluvial, bog terrace of the Dnieper river, loess plain. In the East, the South and the East – erosive-denudation or alluvial terrace plains.

geological structure and relief of the Dnieper-Donets basin cause the following engineering-geological processes. Settling of loess rocks of mainly 7-30cm. At NW common sandy loam, light and middle. loam. In the center. parts – lungs, middle. and heavy loam. In the rest of South – middle., heavy loam. In North. along river valleys, marshes are widespread turf-containing rocks. This weak soils for construction. Also in this part of the widespread gullies and landslides. In the rest of South  along river terraces also widespread landslides, gully erosion. Widely developed and river erosion. There happen shifts, collapses. Generally, landslides are characteristic of the watershed surface. Should pay attention to the construction in the river valleys. Here in the spring after snow melt and heavy rainfall often occur flooding. In places shallow carbonate rocks developed karst processes.

Cretaceous formations are widely spread in Kharkiv, Donetsk regions. Few people engaged in the study of karst development in these regions. On speleological map (distribution map of karst) shows that the voids, the caves of karst origin are widespread. They are studied by speleologists. In many cities, especially small on these rocks are houses, buildings, monasteries, and historical sites. Over time, begin to develop dangerous natural processes that can cause significant harm. So you should pay attention to the study of occurrence of karst processes in these regions.

the Construction without taking into account the soil structure and research occurring natural processes is risky. Geological study can be arranged by contacting a specialist firm of LLC "Guild Engineering".