Slavyansk geomorphologically confined to Kiev Polissya lowland on Nizhnechereksky with blurred Paleogene-Neogene base. In tectonic terms the site is located on the northeastern slope of the Ukrainian shield. In the North-West from Slavyansk river Zdvyzh, through the settlement flow of its tributaries. Absolute marks of a surface within 150.0 m above sea level. 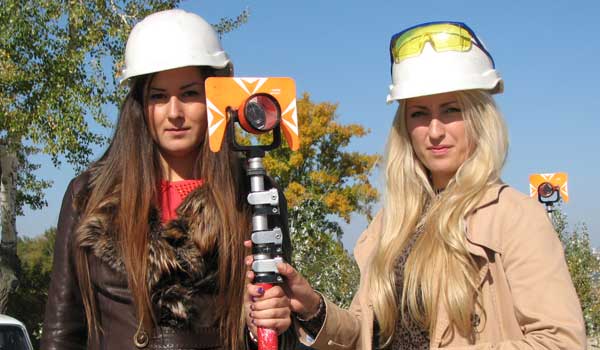 Surveying Slavyansk include geodetic and topographic survey, which are displayed digital topographic maps, plans,  engineering-geological researches, designing.  digital topographic studies the differences of relief, dangerous slopes, underground utilities. At the design stage are entered buildings, wells, border the house. Data can be entered into the total station. And just before the drilling can be made removal of the borders of Slavyansk, and the axes of the orifices of the wells. During the survey team examined the area, pretending to be the location of the wells documented hazardous natural processes, is determined by the level of water in wells and reservoirs. Geology Slavyansk at the initial stage uses archival data and results of reconnaissance.

Survey Slavyansk at the stage of drilling allows to work on the finished topographic map, to make wellheads. The topographic map also helps not to touch during drilling, in the transportation of various invisible communication. After drilling surveying Slavyansk involves surveying the well bore, if the actual data differ from those projected. Geology the designers make the project at home. This is followed by removal of the borders of Slavyansk. Geodetic and topographic survey also help to work with the Geology and hydrogeology of the site. On the basis of their 3D visualized geo.the model predicted dangerous phenomenon.

Generalized Geology of the study area, starting from the top-down:

Geology Slavyansk Quaternary precipitation according to drilling: the surface C/W sand – 1.0 m followed by sandy loam – Loam 5.0 M. light. The site is located within the alluvial plain – the floodplain of Holocene terraces with R/W pianissimi precipitation, quartz, clay. In the East these sediments pass into the alluvium of the I floodplain terrace of glacial sand and boulder clay rocks, loam, sandy loam. In the North-West of the village of Zheltoe appears sandy loess R/W loam, sandy loam, p/W quartz sand. The first pressurized water (Poltava) – come out, the depth of horizon II (Bucha) – 58m. Unconfined water in Quaternary rocks found at a depth of 1.8 m. the Aggressiveness of water cause acid. In waterproof clay sediments may cause the formation of perched water due to rainwater or snowmelt from the strong. The area is within potentially flood prone.

On the seismological risk of basket-mouths belongs to the II category. Sandy soils, sandy loam frozen to 0.8– 1.2 m. According to the complexity of engineering-geological conditions of the area can be attributed to the second category. Difficult hydrographic conditions, the probability of flooding, complex loess-like rocks. The construction of the house without obtaining the Geology is risky business. At any time may appear dangerous natural phenomena that can begin to break down the wall, hitting the ground to begin flooding. To avoid all these complications you can conduct geological surveys together with the firm LLC "Guild Engineering".