Geology and geodesy in Berdichev

Berdychiv geomorphologically is structurally Kozyatyn-denudational a hill in a part of the Dnieper upland on Neogene or pre-Cambrian base. Tectonically the area is located within the Ukrainian shield. The relief is a slightly rolling plain. In the West the river Gelopen (a tributary of the Teterev river). Half a kilometer to the North there is a flow of Gropeni with abundant water. Abs. mark - 251-253м. 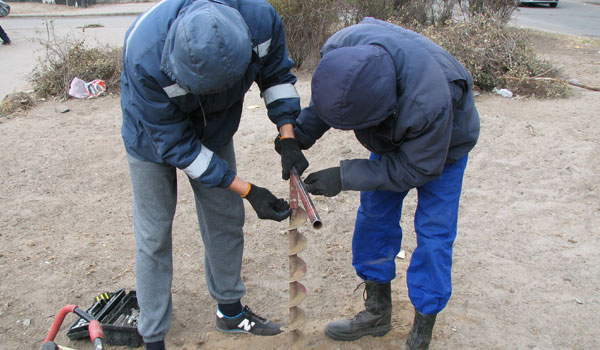 Surveying Berdichev is to create tooooday for future work. According to the plot, objects plotted on topo. plan. Survey is conducted before the design of the facilities. Before going to the site is recognoscere. a survey of the areas. Survey Berdichev is part of a geodesic. works. For this territory are being shot with various residential and non-residential premises, communications. Mark the places where you will buritica well. To distribute the mouths of SLE. is removal of boundaries of Berdichev. As a result of reconnaissance surveys the terrain features, rivers, reservoirs, wells, springs, ravines, flowing observed engineering-geological processes. Archive. information obtained reconnaissance data give an idea, based on what the Geology of the site Berdichev.

the Site is located within the Ukrainian shield. The basis for the Quaternary rocks are lower Proterozoic granites and migmatite microcline-plagioclase ravnomernaya and porphyroblastic. Embedded low power, the layer of Quaternary soil. The thickness of Quaternary rocks up to 7-15m. They are composed of loess and loess-like rocks, loam and sandy loam medium and light. Settling soil 15-30cm. Within the site is overlain by eluvial-delluvial precipitation. On the basis of drilling data you can draw conclusions about the Geology of the site Berdichev. On top is soil-vegetative layer with a capacity of 0.7 m. Below are semi-solid loam – clay Loam 2.3 m plastic loamy soil (1.3 m), which in some wells go into the loam magkoelasticna capacity of 3.0 m Below lies the sandy loam semi-hard, water-bearing capacity of 2.7 m. the sandy loam temacapulin, hydrous – 2.0 m. the Sand is fine – 2.5-4.0 m.

Unconfined groundwater is encountered at a depth of 6.4-6.5 m. the Area potentially flooded. Loesslike rocks are weak soils. Seismic properties of the area belongs to the second or third category (a five-point scale). Complexity of engineering-geological conditions belongs to the II category of complexity. For these conditions it is advisable to build a dirt pillow. It is necessary to design a waterproof activities: removal of atmospheric water in the storm drain system, waterproofing. Soil-vegetable layer and bulk soils can serve as a natural base - it is recommended that their excavation prior to construction.

topographical Survey Berdichev is carried out after drilling. Which is shooting the mouths of wells drilled. Data are submitted on a topographic base. Kertitsa geological graphics (sections, columns). Analysis of data obtained in the laboratory. The forecast ing.-geological processes. Designers  the selected base, if necessary, various engineering methods are designed for the protection of soils. On the finished design data is the removal of the boundaries of Berdichev.

Engineering-geological study of soils and of processes is a guarantee for long life of your building. You will also know about depth of groundwater. To order such studies can call the specialist LLC "Guild Engineering".