Geology and geodesy in Kamplytsya

the Area on which surveys were carried out by our specialists, is located in the village Kanlica in the Kharkiv region. The relief is uneven. Mark the surface of the earth range 80.0-86.0 m. the Village is situated on the Bank of the Seversky Donets river and a picturesque lake. with the Nearest settlements: maps of cheremushne, the Kazanka, vipers, Summer, Genieve, Resort, Zagonetke, Gaidar, estuary, Koropovo. 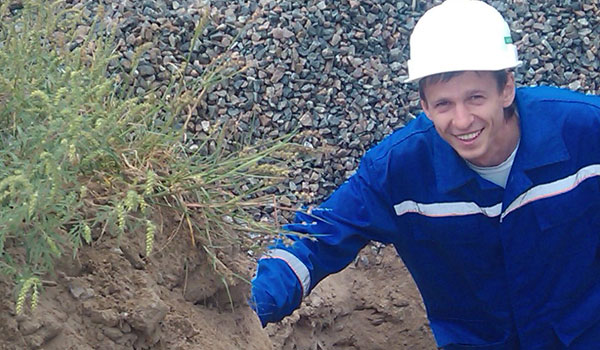 the Geology of the site Complica presents sedimentary rocks Severodonsk dissected terrace plain within the South-Western spurs of the Central Russian upland. In tectonic terms, this Dnieper-Donetsk basin. Prequaternary system is composed of Kharkiv verhneportovaya precipitation formation and precipitation nizhneportovaya Miocene formation. Quaternary system within the locality, starting with the floodplain submitted by: sandy alluvial sediments of the floodplain, the first and second terraces. Then they go into undifferentiated Pliocene-nizhnevartovskoye terraces, composed of eluvial-deluvial sediments – middle and heavy loam.

geological structure of the area specified according to results of drilling. Usually occurs from the top soil layer. On the subject of research he is replaced by a bulk layer (quartz Sands of different grain size, inclusion of construction waste, partially quasirandom) with a capacity of 0.5-0.7 m. Beneath it lies a pale-yellow, brownish-yellow quartz sand with inclusions of black, with a capacity of up to 6 meters. Light black silty loam with layers of quartz sand of different grain size, fluid, explored the power of 2.2 m. the Survey Complica is the purpose of topographic bindings residential and non-residential buildings, commercial and engineering facilities, structures, infrastructure and pipelines.

During drilling, water is encountered in one of the wells at a depth of 1.8 m. Also in the section are silty soils, which suggests that the area is periodically waterlogged. To this is added the proximity to large lakes and major rivers – the Seversky Donets. Area of work relates to the potentially flooded. The level of surface waters can range from 0 to 5.0 m and the aquifer is confined to Kaniv-Bucha Eocene clayey Sands, clays, marls, sandstones. Silt has accumulated, when the territory was flooded during during the high water of the river Seversky Donets.

the Geology of the site Complica due to various factors can relate to complex engineering-geological conditions. In winter conditions, fine sand, sandy freeze to 1.07 m. the Loam and clay – to Medium-grained Sands 0.88 m to 1.15 m. On seismic properties of soils are attributed to the second category.

After a topographical survey carried out Kanlica, you can explore the terrain features in real-world coordinates, predict potential development of dangerous engineering-geological processes, to schedule the well drilling. On the resulting topographic map can be design build.

the Properties of the soil layer weakened by inclusions of organic matter, due to seasonal freezing. Therefore, it cannot serve as a basis and removed during construction. On site there is a slope that during the construction of refines need to avoid the development of landslides. Especially landslides, gullies developed on the steep slopes, the winding banks of the Seversky Donets.

Foundation is recommended to deepen below the frost line of the ground. The base with shallow Foundation can be the ground of the second engineering-geological element. To reduce the likelihood of landslides it is necessary to take measures of engineering protection green areas, regulation of surface water flows through various conduits. The exact location of projected object is set when there is an removal of the boundaries of Complica.

Selection of plot locations, choice of parameters of construction are very important for safe operation of your home. To conduct the necessary research on the area can firm LLC "Guild Engineering".