Geology and geodesy in Kremenchug

the Geology of the site Kremenchug is determined by finding land on the junction of two major tectonic structures – the Dnieper-Donets basin and the Ukrainian shield. In geomorphological terms this is manifested in the border located between the Ingulo-Inguletsky accumulative loess plains dissected by Neogene and Precambrian on the basis of the Dnieper and the alluvial lowlands at the base of the Paleogene. Kremenchug is located on the banks of the Dneprodzerzhinsk reservoir. Absolute marks of the surface of the earth at the site of drilling is changed in the range of 66-70m. The terrain is significantly altered anthropogenic influence. 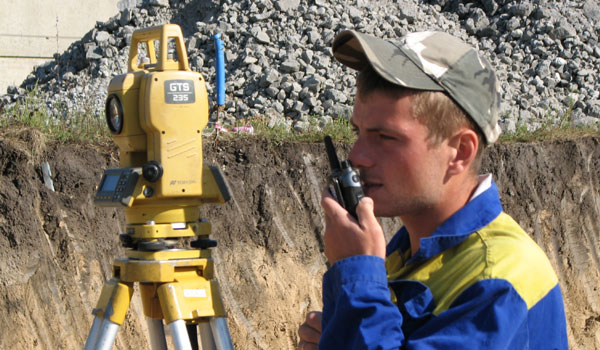 Surveying Kremenchug includes topographic surveying and geodetic survey installed wells. Also you may need to make wells on the site. The result of the topographic survey is topoplan, which caused to farm buildings and engineering communications. First carried out reconnaissance of the site. Drills are laid out. well, documented rock outcrops, ponds, springs. Carried out topographical survey Kremenchug. Examined the area, details of the relief. Measured the water level. Documented hazardous natural processes. To know exactly the location of the buildings and to plan well - is the removal of the boundaries of Kremenchuk. Then before leaving for work with archival geological reports.

the Terrain is uneven, gently wavy. Hills often have a technological origin. with the Geology of the site Kremenchug due to the location of the site at the intersection of tectonic structures is also characterized by two different types of rocks, which form the basis for Quaternary deposits. In the South-Western part of this granite migmatite and microcline-plagioclase, ravnomernaya. In the North-Eastern part – srednedushevye Bucha precipitation formation.

the Plot is situated at the junction of alluvial deposits undifferentiated 1 and 2 terraces (southern part). And in the South – alluvial deposits of the fourth terrace above the floodplain. On the Quaternary sediments overlain by loess and loess-like rocks (light sandy loam, loam medium). The power of these rocks 7-15m. Settling to 15-30cm. In place of drilling going on top of industrial soils with the capacity of 1-2.5 m. Then grayish-yellow sandy loam, slightly moist, plastic capacity of 0.3-0.5 M. Then these silts become intensely saturated, fluid, capacity of 3.7 m. Below are yellow and dark yellow quartz sand, fine and silt with lenses of sandy loam, slightly wet, with a capacity of up to 2m. And at the bottom are light gray, yellowish-gray, fine-grained Sands with thin lenses of sandy loam, intensely saturated capacity of about 5m.

Gravity horizon of water at a depth of 2.3-3.45 m loess-like sandy loams and Sands of different grain size. The horizon has a hydrodynamic connection with the river. The study area is flooded because of the close location of the reservoir and shallow groundwater, which under unfavorable circumstances can rise to above 1m. To negative features of engineering-geological conditions of the survey area can be attributed to the presence of temacapulin sandy loam. Category of soils by seismic properties – II. By a combination of factors, the research area belongs to the II-nd category engineering-geological conditions. The laying of foundations in fluid soils without special. training can lead to uneven deformation of the Foundation. You need to improve the construction properties of subgrade layer-by-layer compaction of soil cushion, etc. the Necessary protective measures against soaking the grounds.

Normative depth of seasonal freezing of soil in Poltava region according to the observations is 1.20 m. After the drilling is performed topographical survey Kremenchug for the purpose of Senate mouths drilled wells. If necessary, also is the removal of the boundaries of Kremenchuk.

Conducting preliminary geological studies of the area where your plot will help you choose the most appropriate foundations to save on materials. Will ensure safe operation of your home. To make an application to the Geology you can through the Manager of the firm LLC "Guild Engineering".