the Geology of the site Novoaleksandrovka is composed of precipitation within the South-Eastern margin of the Dnieper-Donets upland bordering the Dnieper-Donets basin. Smaller border of geomorphological structures are the Ingulo-Inguletsky accumulative loess plain dissected by Neogene and Precambrian on the basis of Gulyai-pole and accumulative dissected loess plain. In tectonic terms the area is in the Southeast part of Ukrainian shield. The village is located on the left privateresidential the Wet slope of the river Sura. The relief is flat, with a slope in a South-westerly direction, towards the river. Absolute marks of the surface are in the range of 91.6 – 93.5 m. 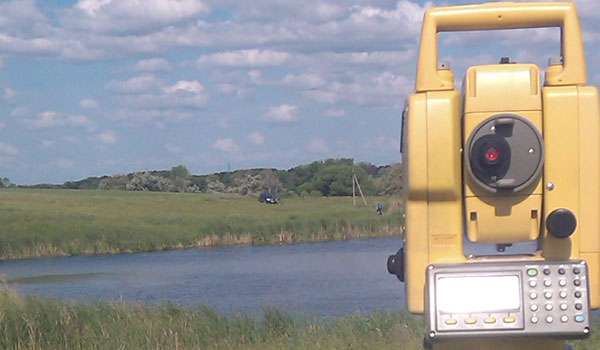 Surveying Novoaleksandrovka begins with topographic surveying, reconnaissance survey. The results of the survey are recorded on an electronic card is created topoplan, which reflects residential and non-residential buildings, structures, various communication. During the reconnaissance survey is the documentation of the exits to the surface of lithological layers existing on-site ponds, springs, manifested in the engineering-geological processes. Might need removal of the borders Novoaleksandrovka to clarify a possible location of the planned buildings. And on the basis of this pre-planned wells. Field logs are recorded and zarisovyval the slopes of ravines, river banks, landslides. the Survey in Novoaleksandrovka needed for geotechnical studies for design work. Before drilling operations are working with archives, on the received topoplan studied the terrain, the slopes.

the Geology of the site Novoaleksandrovka presented prequaternary sediments and bottom srednevekovye, gray-green mottled clay. Then instead of them appear lower Proterozoic granites and migmatite of plagioclase. Above is overlain by Quaternary sediments. The village is situated at the transition of the alluvial deposits of the floodplain of Holocene age undifferentiated and precipitation I and II terraces. A little further North and West they pass into loess aaloo-deluvial and eluvial-deluvial sediments. Common loess rocks are not associated by Genesis with the activity of the glacier. It is sandy loam, light and medium loam. Their settling in the range of 30-50cm. The total capacity is 20-30m. During drilling lithology is specified. Top soil and vegetation layer as thick as 0.4-0.5 m Below the loam subsidence with a capacity of 2.3-2.4 M. They are underlain by sandy loam, with properties subsiding. The upper unconfined aquifer in Quaternary sediments lies at a depth of 0-10m. Because of this, and due to the proximity of the river area can be attributed to the potentially flooded. After drilling in order to Senate coordinates of the wells is carried out topographical survey Novoaleksandrovka.

the Category of soils by seismic properties of the second. Normative depth of seasonal freezing of soils is 0.9 m. the Geological conditions are complicated by the development of collapsible loess soils – sandy loams and loams. Their properties are subsiding while soaking and if you have any additional loads. Sandy loam when moist showing subsidence properties without additional stress under the pressure of the overlying layers and its own weight. The category of complexity of engineering-geological conditions is the second. Soil-vegetation layer during the construction works it is recommended to remove. On such soils it is possible to use strip foundations after the partial elimination of subsidence properties of loess loams through the dirt "pillows". It is also necessary to include a set of waterproof and constructive activities, to provide water drainage, to eliminate water leaks. When a draft is is the takeaway borders.

Geological conditions, composition of soils can vary in a relatively small area. Savings on geological surveys can lead to the appearance of cracks, subsidence or Foundation to even more disastrous consequences. To avoid this you can make a bid on geological researches in the company LLC "Guild Engineering".