Geology and geodesy in Odessa

the survey Area is located in the South of the country, in the center of Odessa. Absolute marks of the surface are within 48m. On a topographic map is the black sea lowland. From location surveys to the Black sea about 2 km. The relief is smooth due to the horizontal structure of layers.

the Geology of the site Odessa presents sedimentary formations Dnestr-bug loess plains of the black sea within accumulative plains with loess Neogene base. In this tectonic scheme of the black sea basin, which is experiencing a modern tectonic movement is gradual lowering. In river beds and on the coast of Black sea East of Odessa circulated nizhneportovaya deposits Kherson horizon. Starting from Odessa and along the coast to the South-West are the famous Pontian limestones srednecenovogo age have been mined since ancient times. And after extraction, which remained under the town and along the coast numerous catacombs and underground karst caverns that are dangerous for construction. 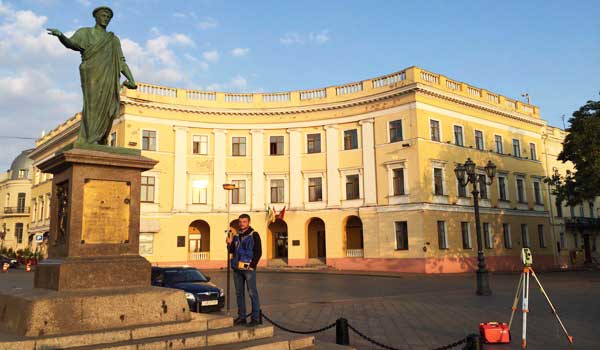 Geodesy Odessa includes a topographic survey before beginning the field work. At the same time conducted a reconnaissance survey of the area, the lithology of the study area, occurring geological processes. Exploring the potential of the entrance of the drilling rig to a selected work area. After carried out the removal of borders of Odessa marked the place where will buritica well. In the North-East of the city are widespread alluvial deposits of the first terrace above the floodplain. The rest of the developed Quaternary aaloo-deluvial sediments. This is mainly loess, folded light, middle and heavy loam. In the North-Eastern part of the city settling loess rocks more than 1m, in the South West – 30-50cm. The capacity of loess rocks of 20-30m.

the Geology of the Odessa site is characterized by a very complex engineering-geological conditions. Along the shores of the widespread talus, landslides, ravines, karst. In the North-Eastern coasts abrasive-accumulative landslide in South-West abrasive-aligned in clay rocks. Adversely affect the construction of loess soils exhibiting subsidence properties. The situation is greatly complicated by anthropogenic human activities, due to which ground water rises up to 5 m. there is a tendency to improve at this level, which intensifies the process of flooding of buildings. Also more and more soaked loess soils and start to fall. Odessa topographical survey is carried out after drilling to Senate their mouths. The depth of seasonal freezing of clayey soils is 0.55 m, sandy soil is 0.66 m. the Category of the site for seismic hazards – 2. Complexity of engineering-geological conditions -3.

you Lay the Foundation in collapsible soil is recommended after the special engineering training to avoid deformations of the walls and the Foundation uneven subsidence in wet soils. The soil must be sealed, be secured. It is necessary to take comprehensive measures to protect against leakage, moisture and water drainage.

in Addition to the danger posed by the rise of groundwater level, subsidence of loess rocks represent the danger of the Pontic limestones age. Lots of catacombs from the old mine workings and cracks, cavities from karst processes. Drilling wells can not to cut production, or emptiness. Here good results are areal studies with GPR. In 2014 we examined by geophysicists of the Odessa underground voids South-West of Odessa. The results were very good.

the Takeaway boundaries Odessa is carried out, when the building was designed.

For a comprehensive study of the construction site you can apply online at the company LLC "Guild Engineering".