Parsley in geomorphological terms is Makarov Moreno-sander plain within the Kiev Polesye. In tectonic respect the area confined to the North-Eastern outskirts of the Ukrainian shield. The terrain is dissected by numerous river valleys, tributaries, ponds. Here flows a tributary of Butch, are major reservoirs of Absolute marks of the surface – 166-167м. 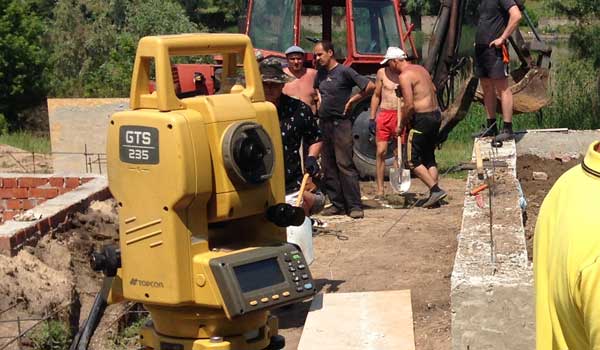 the Most current geodetic service is survey of Parsley, which allows allows topographic maps and plans necessary for carrying out engineering-geological surveys and drafting. Based on the obtained data and a topographic map. It examines the topography, residential and non-residential buildings, communication. During the design  stand at her property line, house, wellheads. On the basis of design data is carried out the takeaway boundaries Parsley before drilling. Submitted axis house, wellheads.

During the reconnaissance of the studied geological features of the area. Explores the place of drilling. In the case of the flowing natural hazards – they are recorded in a field journal. Includes data on water level in a nearby well and cistern, and other information. with the Geology of the site Parsley will constantly be updated as drilling and cameral works. At the initial stage uses archival data and the results of the visual survey. Based on these data, choose the type of rig the drilling depth.

Surveying Parsley is for removal of wellheads, documentation. In order not to hurt during the drilling and transportation of underground utilities, pipelines. Geodesy Parsley after completion of the work needed for the preparation of as-built survey, fixing of the mouths of drill holes and other workings. All these data are displayed on a topographic map. According to the column of drilling wells and vents. Using digital maps creates a 3D-model of the geological, engineering-geological conditions, the forecast for the future.

the geological structure of the area involves Precambrian crystalline rocks that lie at depths of approximately 200-250m. Above are clays of the Trias; of the Jurassic sandstones, Sands, clays; Cretaceous sandstones, Sands; Paleogene Sands, clays; Poltava Neogene Sands, variegated clays. Lying on the surface of the Quaternary rocks are represented by Sands of Pleistocene glacial deposits with a capacity of 20-30m.

According to drilling top-down occur:

Geology Parsley is composed of alluvial and fluvioglacial sediments – Sands of different grain size with the small boulders of bedrock. Closer to river beds overlie the sediments of the first terrace above the floodplain and glacial and water-glacial sediments moraine-sander plains. At a depth of 4.8-5.2 m detected non-pressure underground water in the loess loam. The power of the water table at the expense of infiltration of atmospheric precipitation. Aggressive water - leaching. Water does not have corrosive properties to iron and concrete. Discharge waters are at the depth of 40-47m (Poltava horizon). The territory is classified as potentially flood prone. The construction of basements is not recommended. For given geological conditions of pile Foundation is recommended.

the Depth of frost penetration of soils (sand, sandy clay) from 80cm to 1.5 m Under seismic conditions the site is related to II or III cat. Because of the complexity of hydrogeology and engineering-geological conditions likely to apply to cat II. It is connected not only with the geological section involved 4 geobody. There's also the possibility of flooding. Over the rising of groundwater the properties of silt sandy-clay precipitation can rapidly deteriorate.

To select the most appropriate site for the house, the choice of Foundation and construction material – you can make a bid to host Geology in the firm LLC "Guild Engineering".