Village pomichna is Novoukrainka, Kirovograd region. Drilling works were conducted at the North-Western outskirts of the village. Gidrograficheskaya network belongs to the basin of the river Ingul, through the village flows a tributary of the river Black Tashlyk - R. helpful. The river forms several small and one large water bodies. The surface has a slight slope in a northeast direction. Absolute marks of the surface vary in the range of 216-219м. The nearest settlements are novoukrayinka, stoneflies, Alekseevka, Poddubnoe, Nikolaevka, Rabochego, Kyrylivka, Smilevo, Clay, Chervona Polyana. 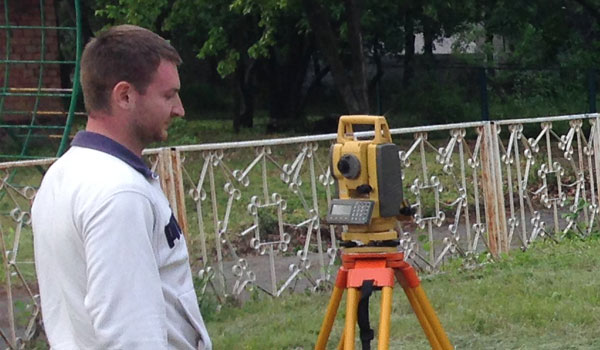 the Geology of the site pomichna is composed of sediments of the southern part Pridneprovskoe hills on Precambrian and Neogene base. On the tectonic map the area is located on the Ukrainian crystalline shield. Indigenous precipitation is Precambrian granites, and microcline migmatite, aplite-pegmatoid. of Surveying pomichna includes field work in geodetic surveying and topography, the site plan.

Near the river are widespread alluvial deposits undifferentiated first and second terraces. The rest of the majority of the common messopotamia rocks loess, strongly dissected elevated plains aaloo-deluvial origin – light, medium and heavy loam with a total capacity of 15-20m, with the settling of 15-30cm. the Removal of borders pomichna is part of geodetic works during the construction works.

During the field work defined a geological section at the site. Brown, sticky, plastic clay watershed of, covered with loess, loess-like loam. The top is overlain by dark brown, black loam, solid, with a capacity of 0.9 m. Brownish loam with broken granite, a dense, hard, with a capacity of 1.1 m. Light brown, pale brown loam with carbonate inclusions, dense, hard, uncovered power – 6.0 m. Survey pomichna is usually performed in the case where before it was conducted.

During drilling, groundwater was not locked, but for the area characterized by the distribution of the first level of unconfined groundwater in Quaternary sediments at a depth of from zero to five meters. With shallow groundwater tables and proximity to the water channel there is a high probability of flooding. Artesian water is confined to the complex aquifer in fractured zone of crystalline rocks of Precambrian granites, migmatite, schist, etc. Water is chloride-sulphate, chloride-sulphate-bicarbonate, salinity of 1-3 g/L.

the Geology of the site helpful in General complex and in General can be attributed to the second category of complexity of engineering geological conditions. It is connected at one end with finding land research within the floodplain terraces, the presence of subsidence lesopozharnyh rocks. Along the river cyanosis widespread landslide processes. Also developed such erozionno-denudation forms like pods, saucer.

Survey pomichna allows you to get topoplan terrain in a digital format. On a digital map is applied to the project of the future building, planned exploration openings. Topoplan analyzed the terrain, the dangerous slopes are studied, the possibility of flooding.

the Depth of frozen loams and clays in the winter of 0.78 m. the soils on the seismic characteristics fall into the second category. Loam homoserine of the first geotechnical layer cannot be used as the basis of foundations of buildings and pre-cut. As the base can serve loam solid second and third engineering geological layers. The removal of boundaries is helpful to determine the exact location of the object to begin construction.