the Pole is located on the Dnieper-Desna terrace plain within the limits of Chernihiv Polissya with Paleogene base. Tectonically is located on the northeastern slope of the Ukrainian shield. The low relief, dissected the meandering valley of the river Desna. The overall terrain sloping from East to West. The average absolute marks of the surface - 96- ' 97. The pole is directly adjacent to the banks of the river from the East. Many lakes, ponds, tributaries, streams. 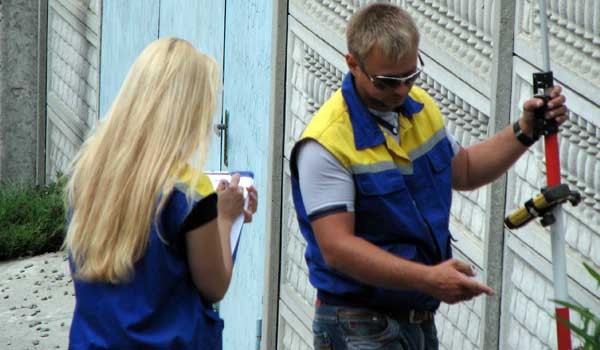 Before beginning drilling operations carried out reconnaissance of the site. Planned the location of wells. the Geology the Sticks includes the study of mountain outcrops, ponds, visible dangerous engineering-geological processes, measuring water levels in wells and reservoirs. of Surveying the Sticks at this stage is to bind the land in the locality. Also is survey the Sticks to obtain the topographic base for the design and drilling operations. Conducted survey of residential and non-residential buildings, engineering communications. The survey data are submitted on a digital map. On this map are designed wellheads. the removal of the boundaries of the Pole is for removal of the axes of the house, its borders and to define drilling locations. After the end of drilling operations  surveying the Sticks required for removing the coordinates of the mouths of wells. Due to complications of geological conditions of possible re-removal of the boundaries of the Sticks. The survey Pole is used for working with geological data, for drawing geological sections, columns of wells.

Geological section from the top represented: the surface are sandy glacial sediments of Pleistocene age (about 20m). Then there are variegated clayey sediments of the Neogene age (about 50m). Below lie the sandy rocks of the Paleogene (30-40m). Clay Paleogene (about 20m). Sandstones and Sands of the chalk (10-15m). Clay of the Jurassic period (up to 150m). The Sands and sandstones of Jurassic (30-40m). Clay Triassic (about 10m) and the Sands of the Permian period (40-50m). Below lie the granites, crystalline basement rocks, ranging from a depth of about a mile. The thickness of sedimentary strata increases to the northeast and decreases to the southwest. According to drilling on the surface lies a PRS – 0.6 m. Beneath the quartz sand, silty – 2.0 m, medium-grained quartz sand – 6.0 meters

the Pole is in the floodplain of the Desna river, which is composed of granular quartz sand, a loam. To the East they pass into the precipitation of the first floodplain terraces -  granular quartz sand with rare interlayers of loam and sandy loam. Soils within the floodplains are not reliable for construction – preliminary geological study. the Geology the Sticks complicated by shallow groundwater levels. Non-pressure underground water during the drilling encountered at a depth of 3.0 m. hydrogeological map depth Quaternary unconfined water – 0-5.0 m. the First Poltava pressure water horizon is at a depth of 24m. Second, Bucha – depth 62-68m. Due to the shallow unconfined water flooding during heavy rains and snowmelt. Consider the plot relates to the potentially flooded. Silty Sands reduce construction properties of soils, decreasing their carrying capacity.

the Depth of frost penetration of soils is 0.8-1.5 m. the earthquake Area belongs to the II or III category on a scale. Because of the location in the floodplain of the Desna river, shallow groundwater, likelihood of flooding, presence of silty Sands area can be attributed to the II category of complexity of engineering geological conditions. Dangerous geotechnical phenomena (karst, erosion, suffusion) is not visually identified. For the conditions of private houses recommended for monolithic strip Foundation on a cushion or hanging screw piles.

Engineering-geological surveys will help identify all features of the structure of soils and of processes, to avoid unpleasant complications during the operation. The order for such research you can make calls to specialist LLC "Guild Engineering" by phone 097-57-246-57.