Geology and geodesy in Rzhyshchiv

the Plot on which our experts conducted research that was located in the Central part of the city of Rzhev in the territory of the river port at the confluence of the R. LePic in Kaniv vodohranilishe. The landscape is flat, the fluctuation of absolute marks in the range of 94-95m. On site surveys are common alluvial soils. with the Geology of the site Rzhyshchiv due to rainfall on the border of two geomorphological structures. The boundary roughly runs along the riverbed of Dnieper. In the southwest it Kanevskaya structural-erosional hills as part of the Dnieper upland on Precambrian and Neogene base. On the North-East of Dnieper alluvial lowland in the composition of the middle Dnieper left-Bank alluvial terrace plain on the basis of the Paleogene. Tectonically this border part of the Dniepr-Donets basin and on the northeastern slope of the Ukrainian shield. Within the floodplain, where is our plot, srednedushevye precipitation Kanev Suite passing when moving away from bed in Kharkiv verhneportovaya precipitation formation. The high places are widespread Neogene gray-green, mottled clay. 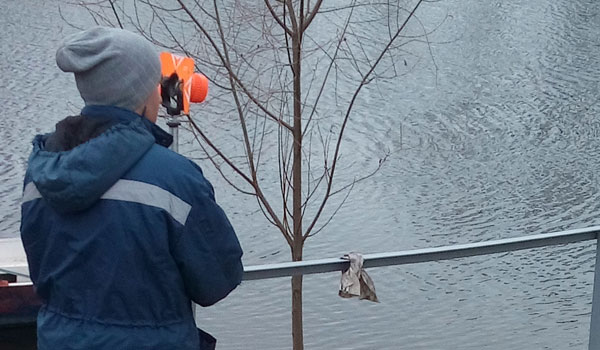 Surveying Rzhyshchiv is needed in almost all stages of survey and construction work. According to the results of geodetic surveys get topoplan areas, residential and non-residential premises, highways and road network. The removal of borders Rzhyshchiv is necessary in the case of difficulty determining the area of works. For example, when there is no residential buildings, are conspicuous landmarks.

At the site on the depth of the drilling presumably alluvial Sands occur. But maybe it's original granular alluvial sandy sediments. Layers are deposited horizontally with reserved power of the strike. Properties of the soil are homogeneous. Lies from the top soil layer (loam, dark mud color with humus) from semi-solid to solid, power 0.3-0.7 m. the Alluvial quartz sand, slightly wet, with inclusions of shell fragments and carbonates, capacity 3.0-4.3 m. Alluvial grey, light gray quartz Sands, water-bearing, with the same inclusions, capacity 8.7-9.3M.

Survey Rzhyshchiv is a form of surveying of the terrain, objects, buildings. Used in land surveying work prior to major construction works.

as a result of drilling operations was podsekin one unconfined aquifer in alluvial quartz Sands of the second engineering-geological element at a depth of 3.7-4.3 m. the Groundwater has a hydraulic connection with the river Dnieper. In this regard, we can make the connection level rise ground water level of the Dnieper. The investigated site can be classified as potentially flood prone.

the Geology of the site Rzhyshchiv extremely difficult. On the map of engineering-geological conditions in these places on the coast of the reservoir is widely developed landslides, gully activity. Away from the river are found saucers, pods, ice ottorzhentsami. On engineering-geological conditions of complexity can be attributed to the third. Seasonal freezing of soil of 0.8 m, the maximum can reach up to 1.5 m. the earthquake applies to 2-3 categories.

topographical Survey Rzhyshchiv and preliminary reconnaissance survey allow us to study the fluctuations, the slope of the terrain. Make preliminary conclusions about the geological structure and occurring hazardous processes. And depending on this choose a method of exploration and sampling.

quasimoney Surface soil layer  is not suitable as the basis for the Foundation, it is usually cut off. For designed objects as grounds recommended the alluvial quartz Sands of different grain size of the second engineering-geological element. If the Foundation can achieve the moist Sands of the third engineering-geological element – need to design for the dewatering. It is also necessary to take into account seasonal fluctuations in groundwater levels, the risk of building on slopes and floodplain areas.

When the project is ready and should begin construction is made the takeaway boundaries Rzhyshchiv.

Good, safe construction and subsequent operation of residential and commercial facilities is dependent on the Geology of the territory, flowing from geological processes. Therefore, before choosing the place you can make a request in the firm LLC "Guild Engineering".