Geology and geodesy in Yahotyn 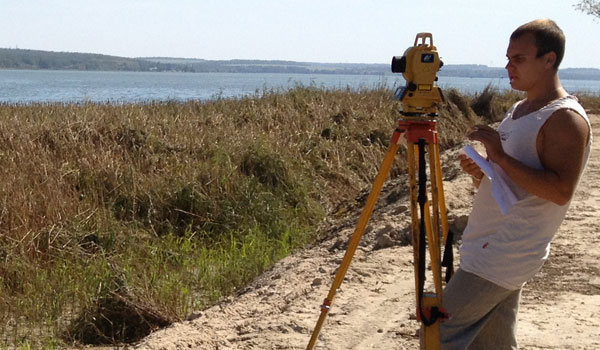 the Geology of the area is characterized by geomorphological Yagotin finding on jagodinskis weak shared plain ( moraine terrace of the Dnieper river) within the middle Dnieper left-Bank alluvial terrace plain on the basis of the Paleogene. In this tectonic scheme of the Western part of the Dniepr-Donets basin. The underlying Quaternary sediments of the Kiev Suite is composed of grey dense clay with marl, sand.

Surveying Yahotyn includes geodetic, topographic survey engineering Geology or before the construction works. Also is useful during reconstruction, demolition. Before beginning field work conducted reconnaissance of the study area. With a view to clarifying the points of drilling is the removal of boundaries Yagotin.

On the job presents of Quaternary sediments of alluvial accumulative plains of the fourth to sixth terraces of medium and nizhnevartovskogo age and aaloo-deluvial sediments. They lissopogonini stacked rocks with a capacity of 7-15m – sandy loam, light and middle loam. Yagotin topographical survey is performed to obtain topographic plan with residential, non-residential premises, communications. The topographic map is necessary for planning various kinds of surveys, for design works in the construction of buildings. On the subject messopotamia soils with fossil soils underlain moraine, loam, sand. In the settlements these sediments covered the bulk soils. In the floodplains of widespread peat layers. This weakened the soil, unreliable for base  foundations.

the Geology of the site Yahotyn the results of drilling: the top layer is represented by the dark loam with inclusions of crushed granite, a hard, dense, power 0.5-1.0 m. Then there are brown, brown loam, firm capacity of 1.0 m Underlain pale loess, macroporous, calcareous, hard, capacity 0.3-2.0 m. Further on is the degraded loess is light-pale yellow, calcareous, plastic to fluid, with a capacity of 3.8-5.5 m lie Below the light brown loam with Buffy streaks, temacapulin, power 0.7-1.0 M. Loess underlain by folded light-pale yellow sandy loam, macroporous, calcareous, plastic to fluid, opened with a capacity of 2.0-2.2 m. After the field work is carried out topographical survey Yagotin for Senate coordinate the mouths of wells.

the Area belongs to the hydrogeological conditions of the Dnieper-Donetsk artesian basin. The water level at the site uncovered at a depth of 6.3-6.5 m. the water Level depending on season can range from half a meter. Area potentially flooded. The forecast increase in water for the next ten years – 0.3-0.5 m/year. First netseverity water horizon is associated with the deposits of the Kharkov of the Suite of the Oligocene. In winter the freezing of clay sediment, clay – 0.8 m. In seysmoopasnom the plot is placed in the third category. Conditions construction is complicated not Mature lissopogonini rocks with settling. The loess are settling with moisture, at increased load. The area belongs to the second category of complexity of engineering geological conditions.

it is Recommended that the compacted arrangement of the "cushion" of local soils. It is recommended to eliminate factors excess soil moisture, to project the path of discharge of surface water, arrange blind area. the Removal of borders Yahotyn is required, when construction starts and the removal of axes, reference points built in.

the Company LLC "Guild Engineering" not only carries out geodetic and topographical survey, but also pre-design geotechnical works.