Ukraine – one of the richest countries in reserves of topsoil and the extraction of natural resources. Ukraine is a country where the world's largest deposits of ornamental stone. The territory of Ukraine was not formed in one moment, and throughout a long historical period. In Ukraine there are rocks of Archaean age that formed 3000 million years ago, and there are Quaternary rocks, the beginning of education, of which 1.8 million years ago, and to this day does not stop their formation. To learn more about Ukraine you can with our company company "Guild Engineering". 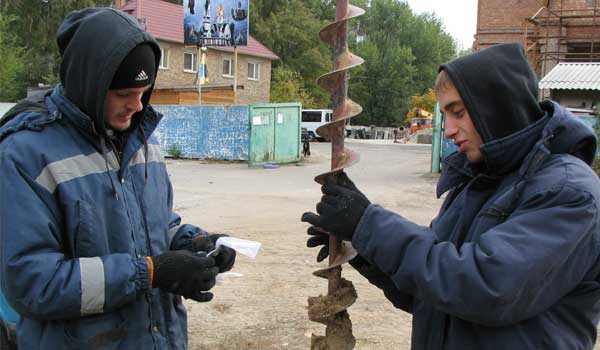 the Most ancient geological structure in Ukraine is the Ukrainian crystalline shield. It originated in the Archean period, from 1600 to 3000 million years ago. Studying a concept such as Geology of Ukraine, we know that the Ukrainian shield was formed by the eruption of rocks, which then crystallized, and then subjected to metamorphism (alteration of rock by heat and pressure). Thus was formed the granites, gneisses, and magnetite ferruginous quartzites, crystalline schists, basalts.

Ukrainian crystalline shield stretches from the Northwest to the Southeast in the middle part of Ukraine, from Belarus to the Azov sea. The zone of the Ukrainian shield captures cities of Ukraine: Zhitomir, Vinnitsa, Dnepropetrovsk, Krivoy Rog, Zaporozhye and reaches Mariupol. The width of the geological structure of the Ukrainian crystalline shield occupies the space from Khmelnitskiy to Kiev.

In the Archean geological era was formed these deposits, Krivoy Rog iron ore basin, which is under the city of Krivoy Rog and stretches from North to South, with a length of 100km, and Kremenchug iron ore district. Develops due iron ores ferrous metallurgy in Ukraine.

Ukrainian crystalline shield – the source of many raw materials for the manufacture of construction materials. This is mostly granite. Studying the subject, Geology of Ukraine, know that granite has such properties as strength, durability, frost resistance and is widely used in construction for the erection of monuments, wall cladding. Ukrainian granites have a unique colour hues, no such variety anywhere else in the world: black, silver, blue with sparkles (labradorite), plum, Golden, deep green and deep red, the color of a peacock's tail. Most of the deposits of the Ukrainian shield is located in the Zhytomyr region. Less deposits in Kirovograd, Vinnitsa, Dnepropetrovsk, Zaporozhye areas.

With the Ukrainian shield and associated uranium deposits, located in Kirovograd, Dnipropetrovsk and Zaporizhia regions, and it is needed for nuclear power plants. Within the Ukrainian crystalline shield, in the territory of Zhytomyr and Dnipropetrovsk regions, explored of titanium ore. Titanium is used in manufacturing submarines, missiles, in the manufacture of artificial sapphires and rubies, synthetic rubber. Also on the Ukrainian shield, in the Kirovograd area, found the largest deposits of graphite. Graphite is used in nuclear power engineering of Ukraine, production of paints, pencils, bearings, dark glass.

historical Geology is known that after the Archean era is the Paleozoic era. In the early era (about 570млн. years ago) on the territory of Ukraine was not of seas and rocks, are deposited then were laminated, and on the area of Ukraine is not preserved. At the beginning of the Paleozoic era on the territory of modern Europe and Ukraine appeared simple land plants, and from the animal world – reptiles, insects and amphibians.

the Geology of the site Ukraine, presented by the rocks of the Devonian period, formed 400mn. years ago, in Ukraine it occurs only in Ternopil – Terebovlia sandstones. In the Devonian period, in the territory of modern Ukraine, began to form the Dnieper-Donets basin located in the North-Eastern part of Ukraine. Dnieper-Donetsk basin captures a large section of Sumy, Chernihiv, Poltava, Kharkiv and partially Dnipropetrovsk and Donetsk regions. Folded geological structure of the basin thick layer (15 to 22km) sedimentary rocks: sandstones, sandy-argillaceous rocks, limestones. Minerals of the Devonian period are oil and gas, which began to be deposited in the Dnieper-Donets basin, Ukraine.

Next comes the Carboniferous period (345млн. years ago). Over 65 million. years until lasted this geological period, between the Dnieper and the Don, repeatedly changed places land and sea, the area sank and was filled with the thick layer of sediments (up to 100 km). with the Geology of the site indicates Ukraine, this area in the Carboniferous period, dense forests, the climate is hot, then wet, then dry. So were formed the strata of carbonaceous, clayey rocks, sandstones and shale. In this geological time on the territory of Donetsk and Lviv-Volyn basins appeared coals.

We know from historical Geology, the Paleozoic era ends with the Permian period (280млн. years ago). On the territory of Ukraine during this geological period was drying. The drying up of water bodies and dry climate led to the formation, over a large geological epochs in 45млн. years, powerful strata of rock salt and gypsum in the Donbass.

In the Permian period, some sections of modern Ukraine, continued to produce coal, dolomite, limestone, refractory clay, manganese ore. Ukraine is concentrated manganese ore 20% of the world's supply. It is a famous field in the Great Tokmak of Zaporizhzhya region and other deposits, formed later in Ukraine.

In this geological period on the site of today's Carpathian and Crimean mountains there is a lowering of the land. Further, we know from geological history that follows the Mesozoic era divided into 3 periods: Triassic, Jurassic and Cretaceous. During this geological epoch, lasting about 170 million years, birds, mammals and angiosperms. In Triassic times the sea was only in a small area of the Western part of Ukraine. This geological period is poor in minerals. All for 50 million years (the time of the Triassic period) were formed only black shales on the area of the southern coast of Crimea.

In the Jurassic period (duration 53млн. years) geological structure of Ukraine was as follows: the whole South-Western part of Ukraine was the sea. In Eastern Ukraine, in Donbass, was tectonic movement. Of minerals, practical significance in Geology, have only limestone.

Cretaceous period 66 million years, geologically, is characterized by the fact that almost the entire territory of Ukraine was the sea. The land was only a small strip of territory of modern Ukraine, which now looks like this: Donetsk – Dnepropetrovsk – Kiev. In this geological time in the Donbas and Volhynia formed deposits of chalk and marl. In the Eastern and North-Eastern part of the Ukraine and Podolia formed phosphorites – raw materials for production of phosphate fertilizers in Ukraine.

In the Western Ukraine, in Carpathian mountains, in the Cretaceous period formed the oil deposits. And the last geological age – Cenozoic era, which began to form 65 million years ago and continuing until now. Cenozoic era is composed of periods: Paleogene, Neogene, Quaternary, or anthropogenic.

In a geological epoch of the Cenozoic in the Ukraine, in steppe, forest-steppe zone and Polesie formed the loess and loesslike loams, which became the basis of Ukrainian chernozems. Loesslike loams are used worldwide and Ukraine for the production of building materials: tiles, bricks, drainage pipes.

In the Paleogene period (41 years) geological structure of Ukraine was as follows: on the territory of modern Ukraine intensified and formed the volcanoes of the Carpathian and Crimean mountains, to establish a modern beach. In Western Ukraine, in Carpathians, continued to produce oil. In this geological period, formed the Dnieper brown coal basin, which scattered the Ukrainian crystalline shield in the Cherkasy, Kirovohrad and Zhytomyr oblasts. The same age Nikopol manganese ore deposits and the Kerch iron ore Deposit.

Neogene period lasting for 23 million years, the climate on the territory of modern Ukraine became colder. In Northern Europe accumulated snow, and then turned into ice. So the ice is increased to 3km From Scandinavia glacier began to move South, and the valleys had slipped to the Central part of Ukraine. At the time, the subtropics has shifted to the South, suffered a lot of animals.

the End of the Neogene period, close to 1.8 million years ago – appearance of the first man.