Detailed plan of the territory consists of graphic materials:

All the materials are developed using special software. For the compilation of digital maps are used, are formed of an electronic map, and then printed on solid media. Every graphic material detailed plan has a certain scale. Consider each such material in more detail. 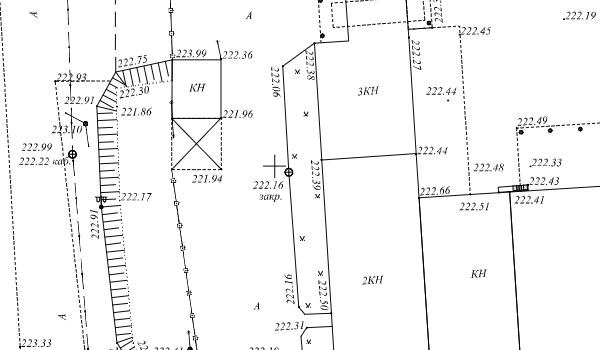 Schema location of the land lot on plan structure of a particular city, town, village, or individual area contains information about the planning structure of the city, district or quarter, etc.. Also, this document allows you to define the functionality of the site and adjacent parcels. This diagram shows the placement of major facilities of engineering and transport infrastructure, as well as other objects which influence the detailed planning of the territory. This document chernitsa in scale 1:5000 - 1:10000 for cities and urban-type settlements, 1:2000 - 1:10000 for villages.

Cost of topographical works from 2 500 UAH for the area

Plan existing use of the site) displays information about the existing planning structure of the site, existing builds (these include red lines, various buildings, factories, garages, filling stations, Parking spaces, pedestrian crossings, and more), real estate cultural heritage, parkland, water features and facilities of the engineering equipment. This document can also be performed at different scales, depending on the type of population for which to develop a detailed plan of the territory. For cities and towns.  it ranges from 1:2000 to 1:1000, for villages from 1:500 - 1:2000.

basic plan contains information about the components displayed in terms of the existing use of the site that are proposed for preservation and future use. If the number of settlement does not exceed 50 thousand inhabitants, then the basic plan is combined with the images specified above. The drawing scale this graphic material for cities and urban-type settlements is from 1:2000 to 1:1000, for villages- 1:500 - 1:2000.

planning Scheme restrictions has a scale for cities and urban-type settlements is from 1:2000 to 1:1000, sat - 1:500 - 1:2000. Existing and planned limits are shown on separate drawings. In the case where the population of the area does not exceed 50 thousand people, the constraints can be depicted on the plan the existing use of the site and projected are shown on the project plan.

Project plan is the main ceragem detailed territory plan. At trade shows and other centers of mass use, sites of historical and cultural significance, red lines, engineering and transport facilities, water facilities, parks, underground facilities, and more. The project plan contains information about the wishes and decisions regarding the construction of new and reconstruction of existing buildings, boundaries of existing parcels of land. Also, this graphic material can display the proposed functional use of the territory and placement of buildings of different types with the office facilities for a period of 3 - 7 years of implementation. This display shows the mode and the parameters for development of the site. Scale drawing project plan is the same as for scheme planning restrictions.

Plan red lines shows the placement of the red lines on points of the geodetic network. In the case where the population of the area does not exceed 50 thousand people this plan can be connected with the project plan. For cities and urban-type settlements drawing scale varies from 1:2000 to 1:1000, for villages from 1:500 - 1:2000.

the Drawing of the organization of movement of transport and pedestrians displays interchanges, streets, location of stops and the direction of transport, placement of buildings, aimed at service transport, designated pedestrian crossings of streets, etc. In the case when the population of the area does not exceed 50 thousand inhabitants, this scheme may be combined with project plan. For cities and urban-type settlements of the drawing is to scale 1:2000, for villages from 1:500 - 1:2000.

engineering Drawing and site preparation, and vertical planning contains information on the vertical planning of the territory, buildings and structures and their arrangement aimed at water diversion, drainage, storm water drainage. Also this document shows all existing structures aimed at flood prevention, irrigation systems, etc., as well as  landslide and erosion features. Graphic document chernitsa scale  for cities and urban-type settlements of 1:2000, for villages from 1:500 - 1:2000.

graphic material engineering networks and constructions depict the existing and design of engineering facilities and networks, installations under the earth. For settlements of urban type scale scheme 1:2000, for villages from 1:500 - 1:2000.

Drawings of transverse profiles of streets displays information about the red lines, footpaths, cycle paths. Specify their sizes. When the population of the area does not exceed 50 thousand inhabitants, the drawing is often combined with project plan. This graphic document chernitsa in the scale of 1:200 or 1:100 points for urban, and rural - from 1:50 - 1:200.

This graphic material, as the scheme of engineering activities of civil protection, develop according to a specific section in the General plan of the specific settlement.

Graphics detailed plan must be made, therefore, their development should be entrusted only to competent and qualified personnel, such as employees of the company " Guild Engineering". Our specialists will perform this type of work quickly and efficiently. Our work you will be satisfied!