Cherkasy region according to the geomorphological characteristics is divided into two large blocks – the left and the right. The latter, in turn, enters the Dnieper upland, intensively subject to erosion. Because there are deep ravines and great differences in the absolute elevations of the terrain is mountainous. Here are Kanev mountains and Sosnogorsky ridge. In the left-Bank part of the Dnieper lowland, is in some places hilly, marshy plain. 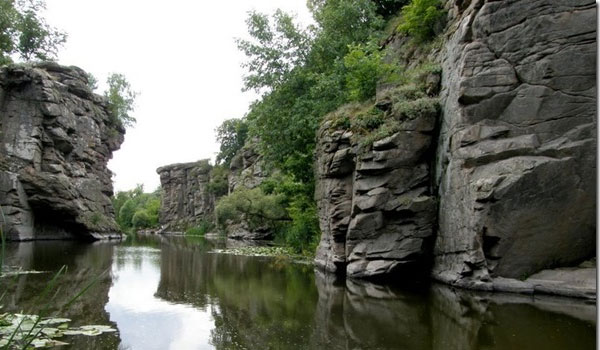 the Absolute level of the Right Bank reach 260m. The landforms are characterised by extensive, deep ravine, beam network, deep river valleys. Absolute marks of the Left Bank reaches one hundred fifty meters. In Cherkasy region more than 180 rivers (belong to the basin of the Dnieper river and S. bug).

let us Consider in more detail the geotechnical conditions of Cherkasy region. In geological structure involves Precambrian igneous and metamorphic rocks of the Ukrainian crystalline shield and sedimentary rocks of Paleozoic, Mesozoic and Cenozoic (clays, sandstones, marls).  Precambrian deposits outcrop in the right Bank of the river banks. In Mesozoic and kainozoiskie time here overlooking the sea. In the Triassic were deposited in grain Sands and sandstones with lenses of clay rocks and limestone. Within Kanevsky mountains are widely distributed mafic Sands, dark grey clays, siltstones, sandstones, and limestones of the Jurassic time. They are exposed on the slopes of ravines and beams. Paleogene and Neogene deposits occur locally on the right Bank. Crystalline rocks of the Ukrainian shield at the top overlain by sandy-argillaceous rocks and limestone.

the territory is characterized by glacial, tectonic and erosional landforms. Kainozoiskie limestone, clean sand and quality of the clay left after the retreat of the sea. In Neogene time, there were four glacial and interglacial epochs. The last glaciers retreated around 12 thousand years ago, they left behind sand and clay sediments, loam, loess. Also in the region are widespread glacial and water-glacial deposits. In the course of geological history, they could be subjected to erosion.

In the South-Eastern part of Cherkassy in geological structure involves loess-like loam with a capacity of up to seven meters. Below six-meter strata of sandy loam. 6-7 m depth reveals the level of groundwater, before the groundwater surface was more than 10m. It is very important to know when designing and constructing buildings or structures, so it is important before starting the construction process to carry out engineering-geological surveys Cherkassy.

In other parts of the city in the geological profile are also involved bulk soils, Quaternary loesslike loams, underlain by sand bottom. The water table at a depth of 7-8m. Sometimes groundwater is not meet even to a depth of 20m. Precipitation occurring mostly belong to the second or third terrace above the flood of the Dnieper. The relief is relatively flat almost everywhere. Average surface elevations range from 105 to 120 m above sea level.

due to deforestation in the mountains there Kanevsky is now widely develop the processes of enlargement of gullies (1/3 of the territory) up to forty meters deep. Chmelensky ravine is the largest in the European part of the continent. The banks of the Kanev reservoir is intensively eroded, they are also associated landslides. Plays a role in the development of such hazardous ingenerno-geological processes and an increased amount of precipitation drawn. The development of landslides associated with loess rocks, sliding surfaces between the boundaries of heterogeneous rocks, slopes. When the degradation of the slope water, as a result of anthropogenic processes are increasing the steepness of the slope and intensified landslide processes.

the Company "G" will perform on your site all the necessary complex of engineering-geological investigations in Cherkassy.