In this article we will discuss the engineering-geological conditions of Odessa region. On the South of the Russian platform adjacent the black sea lowland (syneclise),  filled with a powerful rainfall. From occurring in Cenozoic seas here were accumulative landforms. Also in the formation of the relief played the role of erosion processes, was postponed loess rocks. In the North the lowlands adjacent to the Ukrainian crystalline massif, folded igneous and metamorphic rocks. 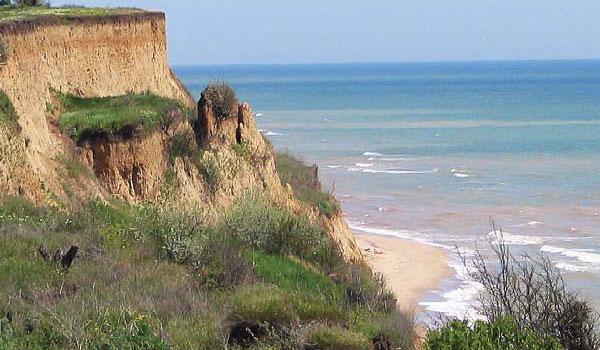 the Highest mark (160m) in the North-Western part, near R. J. Boog – up to 120 m in the North-Eastern part – 50m. Lowlands sloping to the sea, on the coast, around 20m. The beach is often washed abrasive ledge several meters high, often prone to landslide processes. In the Central and Eastern lowlands is quite flat, broken by deep river valleys. The river valleys are associated shallow ravines.

the Lowland filled with Paleozoic, Mesozoic and Cenozoic sediments. Paleozoic sediments up to 1 km developed in the North West region. It slates, sandstones of the Silurian. Mesozoic sediments are widespread locally, it is chalk, marl, glauconitic sand. The thickness of sediments of about 500m. But are particularly prevalent kainozoiskie sediments, represented by sand-clay layer with a capacity of up to one hundred meters in the center of the depression. Kinati represented by the Oligocene, Neogene deposits are composed of Sands, limestones (Sarmatian and mioticeskih tiers), dark clay, alternating clay and sandy sediments. Continental sediments represented by sand and clay. Across the black sea to the deflection on the listed layers lie on top of Pontic limestones. Pontic tier is named after once existing here Pontic sea. He left behind a rainfall capacity of up to twenty meters.

the surface of the lowlands is smooth for the reason that the geological section is composed of smooth layers of sediments. Violations of the terrain associated with fluvial erosion. The network of river valleys has left its mark even on the solid rocks of the Ukrainian massif. River valleys etched in sediments of Paleogene and Neogene age. The valley is very tortuous, at the mouth they form estuaries. In the upper terrace of the main rivers emerge Pontic limestones. Also river valley consists of a floodplain and two to three terraces. Clearly the third terrace of the Dnepr. To the South of Nikopol at the foot of the cliff of exposed sandy river sediments and loam, higher – loess-like soil, passing into loess.

In the Northern part of the basin is well expressed in the 2nd terrace above the height of three meters. 1st floodplain terrace clearly the Y. bug, Ingul, Ingulets. At the bottom of the section is composed of sand, sometimes with loam, loess above are rocks.

Also caught wind deposits with characteristic landforms such precipitation in the form of bumps with a height of up to  twenty meters. On the shores of seas developed spits, bars, mounds of sand, stretching along the coast.

Pontic limestones are a good seal, sole they are always moist. In the deflection above the limestone builds up the moisture – so the ancient catacombs, the voids are usually filled with water. In  the raised parts of the folds is always dry. But here the fractured limestone stack, usually develop karst processes (there are caves, voids). Therefore, before the construction of engineering-geological surveys Odessa should be mandatory, so that in the future no sudden surprises.

On the banks  of the sea one can observe the sandy ledges like stairs, often not developed with a beamed network. Coastal sediments have accumulated in Quaternary time.

black sea trough occurs in the zone of low seismic activity with the epicentre in the mountains of Romania. In Odessa there are earthquakes of small capacity.

In the area distributed the following engineering-geological processes: karst, landslide, erosion. This is compounded by intense human activities. Human-related processes such as subsidence, groundwater rise (causing flooding). Subsidence developed in the field of distribution of loess-like loam and sandy loam. On the sea coast to develop landslide and rockfall.

groundwater Rise that started since the 19th century, led to the deterioration of the bearing capacity of soils and to the formation of underflooding of the territory. It is connected both with anthropogenic processes, and the proximity of groundwater, with the distribution  of Pleistocene loess-like rocks, exposed to subsidence processes. Often it is on these rocks to build foundations of buildings and structures. The most pronounced subsidence properties occur in loess-like rocks at the top of the section with less humidity. When humidity increases, the subsidence properties are enhanced.

Geological surveys for the construction of Odessa will be performed by specialists of the company  LTD. "the GUILD of ENGINEERING" efficiently and on time.