in order To build a reliable building or structure that will last for many years, it is necessary to know the geological features of the land on which planned to build. In this article we will examine the geotechnical conditions of Vinnytsia region and how they can affect further erected the building or structure. 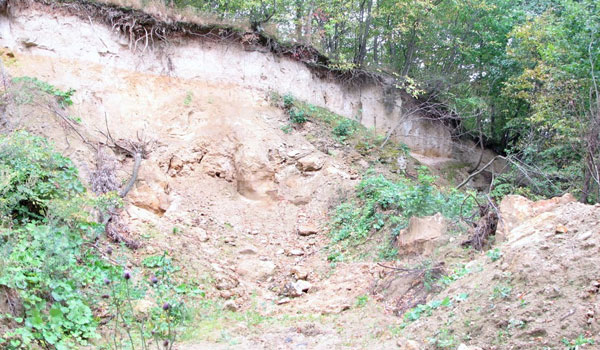 Vinnytsia region is located on the Ukrainian crystalline shield. Geology and associated landforms is complex. The Foundation of the shield formed in Archean-Proterozoic era and represented mainly by granites and gneisses. In places of exits on the surface formed deep ravines, gullies and riverbeds. In the area where the shield is tilted in a South-westerly direction, over crystalline rocks have accumulated Paleozoic and Mesozoic sedimentary rocks. For example, the capacity of Silurian Sandstone, shale and limestone in some places reaches 200-300m. Deposits mainly stretches along the rivers. Also widespread Cretaceous sediments deposited in the Silurian rocks of wide band average power 50m. The Neogene sediments can be found almost anywhere. Their capacity to one hundred meters. It, shell and oolitic limestones, confined to the watersheds, they are blurred in river valleys. Rocks used as raw material for burning lime. The Neogene is represented by Sands, loose sandstones, clays, and pebbles.

Under the influence of water flows, erosion of sediments formed in the river beds, valley, ravines and gully landforms. The overall topography is characterized as undulating, in places hilly plain. Most of the territory is covered by the Podolsk plateau, also there is the Dnieper upland. Plateau cut by numerous river valleys, ravines. Weathering friable Sandstone and Silurian limestone in the river valleys created Eolian pillars, rocks in mushroom shape, Tovtry. And on the surface of weathered rocks of amazing forms of relief in the form of pockets-cells.

In the Podolsk plateau to the East and North-East the crystalline rocks of the basement is overlain by Quaternary deposits of small capacity. Sand and gravel deposits are widespread in the Dnieper upland, left by the melting waters of the glaciers. The North-Western part of the region is very swampy in Letychiv the lowlands, where peatlands are developed. In the lowland places stick out of the cliff limestone of Sarmatian age and granitic rocks. In the valley of accumulated melt water from glaciers, forming sandy deposits.

With specific Geology, hydrography involves active well-developed network of ravines and gorges. Water podrachivaya even strong crystalline rocks, forming a canyon-like river valleys. It is therefore very important to conduct before the construction of such work as engineering-geological surveys Vinnitsa. The catchment areas R. Y. bug river landforms are relatively quiet. They are in a complex with a small set of varieties of common species form simple engineering geological conditions in the area. There are following types of soil: modern alluvial deposits, the upper-middle Quaternary eluvial, aaloo-deluvial sediments. In the Holocene, formed by silty and fine-grained Sands, sandy loam and clay loam. Within the floodplain of the southern bug, they are covered by Sands with a capacity of up to several meters.

Light and heavy loams have a high density (about 5%), low porosity. The older the breed, the greater the density and lower porosity. In addition to gully erosion and lateral plane wash also developed in parts of the watershed. There are also karst phenomena and wetlands. It should be noted that these processes have not gained much in-depth for a good water-resistant properties of soils, low water filtration and relatively heavy weight of loam, sandy loam.

To enhance the activity of engineering-geological processes can lead to the uncontrolled, and unwise human activities – mining, agriculture, etc.

OOO "GUILD ENGINEERING" will perform on your site, you need a complex of engineering-geological surveys of Vinnytsia and Vinnytsia region.