Engineering-geological conditions of Zaporizhzhya region are quite complex. From the point of view of the tectonic zonation of the main part of the territory of Zaporizhzhya region is the Ukrainian crystalline shield of Precambrian age. In the southwest area captures a small part of the black sea basin Mesozoic age. In the South of Zaporizhia oblast (coastline) on the surface are the oldest rocks in the world the age of 3.5 to 3.6 billion years. In the Northern sea of Azov is famous geological monument "Stone graves" age of 1.7 billion years, which was used in ancient times as a place for ritual services. The monument is preserved the outputs of Sandstone from an ancient sea Sargatskoe. It seems the only outputs Sandstone of this age in the black sea and Azov sea. The dimensions of the outcrop, about 200 m. As a result of exposure to water, wind, temperature Sandstone breaks down and turns into sand, fractured into small pieces. 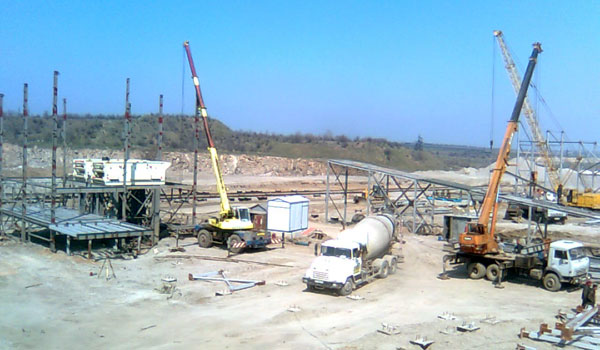 In the South and in the North are the deposits of the Donets folded structure. The geological structure of the territory involved rocks of Neogene age, coming out almost everywhere. On the shore of the Kakhovka reservoir. out of the rocks of Eocene, Oligocene, Palaeogene age.

South-West of Zaporizhzhya region manifest such negative engineering-geological processes like the formation of ravines and gullies, especially on the Dnieper river Dairy. At the origins of the last river developed plane wash. Also on both banks of the river and in the South-West part of Zaporizhia region developed the processes of salinization.  Here and in some adjacent areas are developed the processes of subsidence of the soil. Along the banks of rivers and on the coast of the Azov actively the processes of erosion. This is due to human activities and some natural factors. Also cause of the intensification of the erosive processes was not conducted the required engineering and protective activities. In these places, in the coastal areas and in the Donbass technogenic human activity is the main cause of the intensification of the processes of caves 2-3 times. As a result of drainage, weirs, mining, etc. such processes have become even more intense the two times. Also recently on the territory of Ukraine grew and other negative engineering-geological processes due to intensive economic activity.

According to geologists with extremely high probability under the Dnieper hydroelectric power station and Zaporizhzhya nuclear power station is a tectonic break. This fact was ignored at the beginning of the construction. According to calculations of scientists because of this fault, the dam can collapse. And then the wave height of ten meters would flood the plant.

southern Ukraine clayey soils, loams, silty Sands with strongly varying properties depending on the season. Under these conditions, it is important to carry out engineering-geological research. Before construction it is necessary to investigate the physico-mechanical properties of soils, their bearing capacity, properties of groundwater. Ignoring the engineering and geological work could lead to cracks on buildings, subsidence of soils, to different kinds of deformations.

In Ukraine there are too many buildings and facilities subject to such deformations. The main reason are loess soils, with properties subsiding. In the Zaporozhye region just developed such complex soils. The depth of these soils reaches 30-40 meters. And the drawdown of buildings and structures under its own weight is almost 1 m. Only in Zaporozhye about fifty buildings with a slope exceeding several times the maximum limits.