Engineering-geological conditions of the Chernivtsi region

Engineering-geological conditions of the Chernivtsi region is very interesting and have their own characteristics. Chernivtsi region in the North-East covers a part of the Russian platform, in the South-West of the Carpathian mountains, in Central – Carpathian whipping. Crystalline basement rocks lie at a depth of from one and a half to five kilometers. Above is overlain by sedimentary rocks of upper Proterozoic, Cambrian, Devonian, upper Jurassic, Cretaceous, Neogene. These formations form separate structural elements monocline and deflections. Neogene rocks have small power, represented by carbonate terrigenous sediments. From above they are covered by alluvial, Eolian, deluvial, eluvial sediments of Pliocene and Quaternary age. Pidkarpatska deflection in the outer part represents the submerged edge of the platform, folded rocks of malassa verkhneportovaja age power up to 1.5 km away. 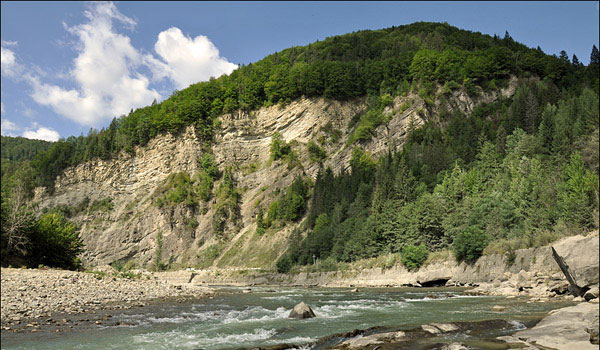 Within the Outer Carpathians finding common shale, Paleozoic carbonate rocks of terrigenous origin, rocks of the flysch. Anticlinal folds of the Boryslav-Pokuttya cover is formed of low mountains, stretching along the strike of the rocks. They are composed by flysch of Cretaceous and ninemilehouse age. Within a narrow Samborsky cover common salt motley, not sorted, redeposited Miocene sediments.

the Lowland of Pokuttya-Bukovyna Carpathians occupy only a quarter of the region (altitude from 800 to 1300 m). In the South-East are Chyvchynska and Hrynyavski mountains. In the valley of the Prut river is the Carpathian hills with heights of up to five hundred meters. Here flat divides separated by hills. This ancient terraces of Pliocene age. The slopes are intensively developed landslides. In the North region is Podillia upland, with altitudes up to three hundred meters and Khotyn hills, which is a plain with elevations up to 510 m,  dissected terraces of the valleys into separate blocks.

overall, the region's terrain in the North and plains in the center – foothill, on the South-West mountain. In the plains it is Podillia upland, loess stacked rocks, forming a wavy relief. In the field of more than seventy rivers with a length of about ten kilometers.

In the valleys and floodplains groundwater table is shallow, so the soil is almost always moist, and this should be considered when choosing the type of Foundation and depth of its emplacement. Therefore, before construction is necessary to carry out engineering-geological surveys Chernivtsi to know the exact level of the groundwater. In Zastavna and Kitsman district, there are karst cavities, depressions. The most sublime places are covered with loess-like loam. The lofty plateau, the slopes of the plateau are composed of loess-like loam (Kelmentsi and sokyryany areas). Here the water table is at a depth of fifteen meters.

At the end of the twentieth century in Stroinska area tectonic shift have destroyed and damaged about two hundred houses. In the area often lapses occur in the locations of roads, and on the walls of the houses revealed many cracks. Geologists explain that active filtering of groundwater, their shallow depth and resulting in waterlogging of soils. This is also compounded by anthropogenic activities (the process of levelling the soil), deforestation. The area belongs to the zone with high seismic activity. Almost daily there are microearthquakes, also sometimes there are tectonic shifts of the earth's crust. In the city of Chernivtsi in the local field amplitude of earthquakes may increase by 1-2 of the ball, for example, on slopes where there are landslides. But such areas occupy approximately half the area of the city. Traditionally, the landslides occur on the slopes of the banks of the river Prut. But landslides can occur on the streets. Earthquakes serve as an impetus for their occurrence. The majority of landslides occur in moist soils where groundwater is close to the surface.

To predict potential damage in a large scale to investigate the soils under buildings and structures. Then will we know the resistance of these structures to the earthquake, how many points they will collapse and there will be landslides. In Chernivtsi in the geological profile are alluvial and deluvial clay and clay loam of Quaternary age. Upstairs can be filled soils, PRS (1-2.5 m). Below the plastic loamy soil loam, yellowish, calcareous, ferruginous, sandy (four to six meters). Clay, green, calcareous, with lenses of sand (1-1.5 m). Groundwater is at a depth of 6 meters in average, seasonal fluctuations of water +/-1 m.

the Company “the Guild of Engineering" provides geological services in all over Chernivtsi and Chernivtsi region. Geology of Cernauti will be performed by our specialists within a specified period.