Engineering-geological conditions of Sumy region is quite interesting. A region in the North-East is located on the outskirts of the Voronezh crystalline massif. Most of the site lies within the Dnieper-Donetsk aulacogen. Geological and hydrogeological device in different parts of the region differ from each other. Voronezh massif comes in a narrow strip, of a width of up to forty kilometers. The absolute level of 200-240 m. the Elevation decreases to the South and southwest. Precambrian crystalline rocks are covered by sediments of Carboniferous, Cretaceous, Paleogene, Neogene and chetvertaki. In the East and North-East parts are exposed or have the shallow horizon sediments of the Cretaceous system. The Paleogene and Neogene, are composed of clay and sandy clay sediments. 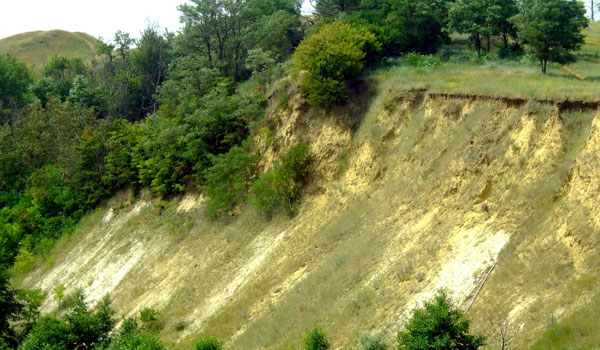 On the territory of Sumy region is a major Eastern oil and gas region. First oil here found by chance in 1935 when I was looking for potash raw materials in Romny area. Oil fields are often confined to salt domes. While searching for oil in the area of Akhtyrka revealed the presence in these places anticlinal bend. Brachianticlinal fold has a direction North-West and complicated system of longitudinal and transverse discharges. Oil-bearing sediments from Devonian to Jurassic, mainly sandstones.

Groundwater is bound to the sediments of Cretaceous, Paleogene and Neogene. Filtering water occurs in fractured and carbonate rocks sand, opoka. Aquifers lie at a depth of from fifteen to one hundred meters. Rivers form well defined river valleys, terraces in the Cretaceous and Paleogene sediments (clay, sand, carbonates, marls). Along river valleys or tributaries develop beams up to ten kilometers. The slopes of hills composed of Pleistocene, Holocene deluvial loam. Also river valleys due to the formation of gullies by carbonate rocks (chalk, marl, flask). The Quaternary system is represented by loess-like sediments. Gullies have sloping sides.

the Northern part of the region is situated in the most low-lying parts of the woodland (Voronezh crystalline massif). The relief is wavy, folded by Sands, clay sand left by glaciers.

In parts of the city in the Sum of favorable engineering-geological relation to the place: smooth, high floodplain terraces, gentle slopes (slope angle up to ten degrees) and groundwater depth up to 15m. During construction it is necessary to consider sagging properties common loess-like loams and sandy loams (refer to the first and second type), so geological engineering Sumy should be required before construction.

To less favourable places for construction in Sumy include: river valleys and beams with angles of slopes from ten to twenty degrees, alluvial Sands with lenses of sandy loam, loam. A shallow groundwater table up to three meters. When designing it is important to consider the level of groundwater.

the worst places in Sumy for construction are: slopes with slope angle more than twenty degrees, the floodplain of the river, the bottom of the beam. Very steep slopes, folded loam sandy loam, easily occur landslides. As floodplains are susceptible to flooding. These soils are continually moist, which worsens their bearing capacity. Also in recent years in the city, the groundwater level increases in the flood plains of rivers and lakes. In this regard, in some floodplain areas are observed flooding.

In the city flows the river Psel and its tributaries, there are also a number of lakes. Rivers with sloping banks, meandering channel. The main aquifer (the Dnieper-Donetsk artesian basin) are the upper Cretaceous marls, and chalk deposits of Cenomanian. The shores of rivers and lakes in Sumy susceptible to abrasion under the action of waves they vypilivayut. For their protection are special engineering activities. Research institutes mapped to the areas of flooding within the city.