To control the quality of construction is the implementation of such services as Executive geodetic survey, which will allow to monitor the work of the builders at every stage of the construction process. The work necessary to verify compliance of the design documentation of the Foundation pit, underground and aboveground parts of the structure, quality of laying underground communications. Executive survey allows to identify all deviations from the original project documents, and to take measures to eliminate mistakes during the installation and construction works. It is very important that these works were carried out by qualified surveyors.

Control surveyors contractor can produce a land-surveyor with qualifications of the same level or higher than the geodetic service that monitors. Control Executive survey allows you to figure out how exactly it was produced by the sentencing project in nature, and also to find all defects with respect to the project which were valid at the time of installation and construction works. Control Executive survey is carried out to comunicaci laid, and linear structures. At the end of the Executive control of the survey compiled by the appropriate documentation.

Performing Executive shooting the lowest contractors latest, high-precision total station according to the last Peeps geodetic fashion, we often come across situations when our foundations and the Executive scheme for their production is checked by the surveyors of the CUSTOMER with plastic 10-meter  roulettes and technical theodolites 80 years who have not served in actual fact never, in principle. And then when signing the act of acceptance-transmission of the foundations they nominated us requirements: you will make the axis for each Foundation of 4 pieces each fiducial mark, such as +1.0 meter on each Foundation, grant Executive control scheme, and we will check. That is, go with roulette, promeris from the axis to the corners to the anchors and then if it matches, then we will take your scheme, if not match, then either axis to alter or Executive survey measure. To such requests to our bosses had a very powerful response. I always liked the answer of one of the Italian foreman Pierrot Lariche. He said: "Our surveyors will give you the coordinates of two points in the area of Executive surveys. You take the drawing and check the foundations themselves. And in a day or to a Playground, or give an official paper about the mismatch constructed structures to the project. If by tomorrow you with this task can not cope, then you have no place on a construction site engineer, you place in the Bazaar to sell beer”. In these words lies a deep meaning. After that on the same Foundation came specialized surveying company to perform the control and as-built survey, or after a week of torment grandfather surveyor with theodolite everyone understood that it will be easier to believe us as performers of this shooting on the floor (of course, all licenses, certificates, permits and testing devices we have is in order). Either customers have made about us help from their friends, and in response I heard only positive feedback. 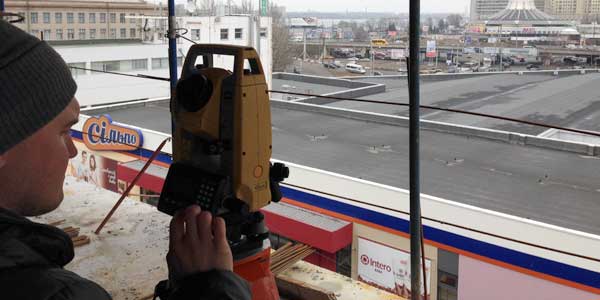 the very essence of Executive control scheme involves the following:

In conjunction of these factors, the CUSTOMER has a 100% satisfaction guarantee  the quality of both the project and the correctness of the geometry of its construction. This procedure is usually carried out before cash settlements for work performed. In the case of inconsistencies you as a payer have the minimum delay of payment until Troubleshooting, maximum discount for poorly executed work.