Features of design of foundations on loess soils

In this article we will consider features of the design of Foundation on loess soils. The loess is called homogeneous sedimentary calcareous loam and sandy loam, light yellowish, grayish or straw-colored. Usually the bedding cover, in the power dividing part, in the ancient river valleys up to hundreds of meters. In rocks dominated by silty particle dimension, the clay component may contain up to thirty percent. The porosity of such soils up to 50%. The fine particles of loess formed penoobrazujushchim minerals. The major components are composed mainly of quartz and feldspar with various impurities kodoobrazuyuschie minerals, etc. The size of the particles constituting the loess loam are, to a lesser extent, to sandy loam. 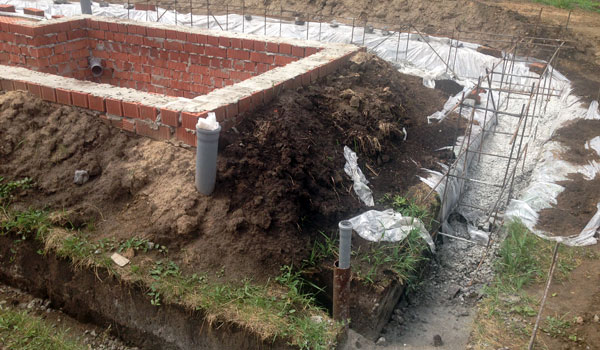 the question of the formation of loess rocks is still controversial. The Genesis of education is very diverse: water flow, transport by wind, temperature, weathering, precipitation in water, etc. Some researchers suggest that the loess formed in the result of joint action of multiple processes simultaneously.

According to the hypothesis of Aeolian loess is formed by transfer of dry dust by the wind. When migrating dust particles interact with each other is formed of positively and negatively charged particles. At the end of the unipolar charges repel each other, they form a connection with the uncharged particles, or particles with a weak charge. The result is formation of a solid bottoms.

With the question of loess formation and associated rocks question about the conditions of formation of subsidence to their properties. Settling is a characteristic feature of loess rocks. Due to the fact that such engineering and geological phenomena result in deformation of buildings and structures, their destruction  pay great attention to the study of the Genesis of loess rocks, formation subsidence. One group of theories is the settling of rocks arises at the time of sedimentation during the conversion of a silt particles.

But the fact that the settling soil is stored for a long time. According to another group of hypotheses subsidence properties of soils are formed after the formation of precipitation subsequently, for example, due to cycles of freezing and thawing of soils. The result is the crushing of large particles to form smaller particles. This theory is well supported - the formation of loess-like rocks are confined to large-scale glaciations.

as a result of wetting of loess rocks can be compressed at low pressure and lapses occur, subsidence of soil, formed by pseudokarst, ravines are formed. May be hurt buildings and structures. The loess have high porosity, they absorb water and turn into quicksand. In such soils complicated the construction of both ground and underground buildings and structures. In loess rocks in the moisturizing connection between neighboring particles become very weak – the load-bearing properties of the soil are lost. From others also natural factors  determines the resistance to compression and shear. But dry loessial rocks stand firmly buildings and structures, their properties deteriorate when wet. For example, in case of accidents in water pipes, sewers, etc.

When choosing the place of construction and design of Foundation  on loess soils should avoid areas where there may be water leakage. To protect against subsidence phenomena in such soils the reclamation is carried out by drilling special wells with depth up to eight feet. In them is sintered by burning the surrounding loess soils.

During engineering-geological investigations chart areas where such rocks are common. Define power layer, describe each layer. Document deformation on nearby buildings and structures, sinkholes, subsidence in the ground.

the construction on loess soils began to engage intensively in connection with the fact that such soils occupy a very large area. On such soils in our country were built before large metallurgical, machine-building plants and need to know regularities of changes in soil conditions, the maintenance here of buildings and structures. Currently on such soils is also under intensive construction. It should say that on such soils occur most catastrophic engineering-geological phenomena, especially when rising groundwater level or due to water leaks from pipelines.

When designing foundations of buildings on loess soils need to consider appears when soil moisture overhead. Planning a special event engineering (drainage  etc.) to reduce soil subsidence, to reduce the number of spills from pipelines. Buildings and constructions with a source of water (e.g., water towers) have lower relief.

Order geological engineering, You can at the telephone number listed on the website, or request a call back. In the near future You will be contacted by our specialist and will answer all your questions on the Geology of a site under construction.