Calculation of volumes by way of bulk samples

the Method that is called by way of bulk samples is often used in the case of the calculation of the volumes of rock, but only when they are marked in the projection on the plan with the numerical designations. In turn, this method is used when there is a need for estimates of the volume of excavated rock. The use of this method is possible when the loop count is incorrect complex shape. This method is used provided that the area of the notches in the plan much more than the average extracted power. So it is appropriate to use the method of bulk samples in cases when removing the power is not uniform over the entire area of the counting.

1 Classical variant of the method of bulk samples.

the name Itself indicates the existence of some maps, which considers the volume. The calculation is carried out by means of a sheet of transparent paper on which ink lined squares minimum size. The sheet is superimposed on the site plan excavation and calculated analytically, the sum of the heights of the excavated layer at the vertices of samples that fall inside and on the contour of the recess, and then calculates the sum of the heights of the layer that was removed, the tops of the samples that fall on the contour extraction

. After all the above is the calculation of the total volume. When this formula is used

2 Modern variant of the method of bulk samples.

the Company "Guild Engineering" is used to calculate volumes. Payment is due  PC and software complex . Because measurements are made with latest high-precision total stations, this allows you to use the potential accuracy of the calculations at 100%, and as much as possible to eliminate the human factor in the calculation, often expensive excavated rocks. The calculation is performed in a manner analogous to the classical variant of the method of bulk samples, but all calculations conducted by the program. The surveyor makes the system measurement data, which contain information about the elevations at the site of work, measured on the basis of the contour of the object, but not less frequently than every 15 meters, often for complex reliefs are measured every 0.5 m Then is the most important step is the data analysis and model building elevation. The model implies the selection of poor or doubtful points, uncharacteristic of points that can affect the calculations, and adding precision to the estimates. Then resources software system GeoniCS is a breakdown of the loop count on the squares of a given size. The next step is the automatic calculation of marks in each vertex calculated squares that indicate compliance with elevations in a given area before excavation works (the so-called mark "black surface"), the altitude after the mining operations (the so-called mark "red surface"). To the left of a pair of marks indicates their difference, which is the power of the captured layer at this point. 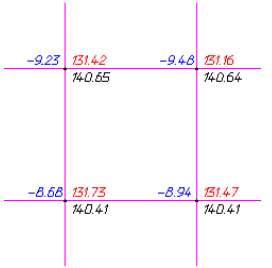 Then, the third step, the software package calculates the amount of excavation within the boundaries of a particular square, by finding the arithmetic average of the layer height squared and multiplying by the area of this square. 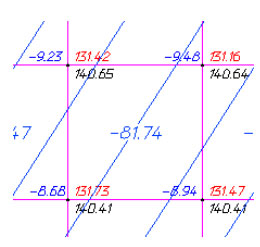 I.e., the volume within the boundaries of the square 3x3 get from the expression.

the Total amount of extraction obtained by summing all the amounts calculated in squares.