Construction of the bottom card waterbody or hydrographic survey 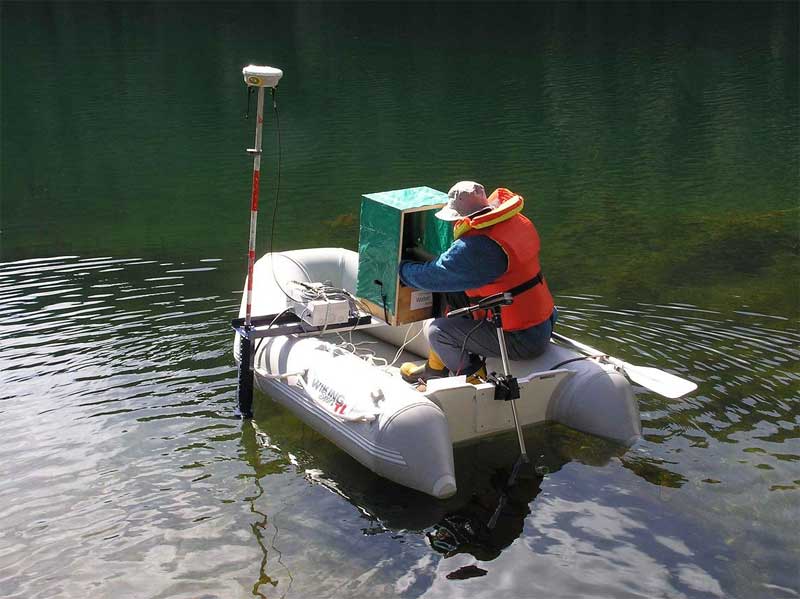 Drives with stormwater and industrial wastewater.

Why would you want to shoot the bottom of bodies of water?

The construction of topographic maps of the bottom of water bodies interested customers the company "Engineering Guild" in various cases:

Quite often, in the planning of hydrographic surveys there is a need in the scope of engineering and survey work, not only the bottom of the water body, but also its coastal zone. For example, when the shooting channel (the so-called shooting the bottom surface and the banks of the river on the segment). In these cases, the value of capturing the coastal territory or customer surveys indicated in the preparation of technical specifications for the production of engineering and geodetic surveying, or taken in accordance with existing regulations governing the conduct of channel surveys, taking into account the position of the water's edge in the low-water season.
The scope and accuracy of hydrographic survey

Performed hydrographic surveys the bottom of bodies of water, and hydrographic charts are built into engineering purposes, using standard scales ranging from 1: 500 (for small water bodies) to 1: 10,000 (for large reservoirs, lakes, large areas offshore). Based on this kind of shooting measurements points water bottom depth, the error which depends on the complexity of the equipment used and the recording conditions. Acceptable for most engineering problems considered depth accuracy:

Methods for geodetic measurements used when shooting the bottom of reservoirs

Most often they are used individually, but for particularly important and is one hundred percent reliable information, conducted survey complex, combining the research program with two or more methods.

Moving the equipment for shooting on the job site

In contrast to conventional surveying, surveying equipment to transport on the job site with the hydrographic survey is required to use special tools. Depending on the area of ​​the object and removes water approved recording program for these purposes may be used:

The most frequently used and spent in Ukraine hydrographic survey method is the method of local measurements. It is based on carrying out a series of point measurements of the depth profiles specify the number and orientation of which is dictated by the shape and size of the water body. depth measurements are made on the surface of the water, and the horizontal coordinates of the measuring point is tied to the nearest point of local geodetic networks. Detail, the precision of this method is determined by the number of profiles and set them along Surveying points. Accordingly, the price is calculated and hydrographic surveys.

hydrographic survey method using sonar provides information about the depth of the bottom is not only at the position of the measuring device, but at a certain distance from it. Deciphering sonar data - enough time-consuming procedure geodesic, and therefore the use of sonar method is justified only in large bodies of water, or if the target enters the detection of hydrographic survey at the bottom of the pond foreign objects of a relatively small size.

Progress in the development of unmanned aerial vehicles allowed to develop a method of hydrographic aerial deservedly becoming increasingly popular. In reservoirs with small depths (up to fifteen meters) and clean, quiet water hydrographic survey using drones not less effective than other methods of shooting, and the performance is even ahead of them. Aerial view allows you to quickly perform the field work stage at the bottom of a large area of ​​the test. convenient and that aerial photography allows you to build and topographic plan of the coastal strip.

The kit of materials received by the client of "Guild of Engineering", which was commissioned by the hydrographic survey, include: