Auger drilling: the advantages of the method

the Diversity of geological conditions led to the fact that there are several ways of drilling: coring, shock cable and auger. The choice of method of drilling is dictated by the characteristics of rock properties and the purposes for which it is drilling. The advantages of auger drilling can be considered as high penetration rate, the ability to drill a well in water-saturated soil without casing, good visibility (ease of definition section) for sinking of wells in clay or other cohesive soils, Sands.

in the production of geological surveys is often a preference for other methods of drilling. For rock - coring drilling, and sand-clay thicker, Melo-marl sediments, fractured sandstones - shock-rope method of drilling. This is due to the fact that a rotating auger destroys the structure of soil, which passes. 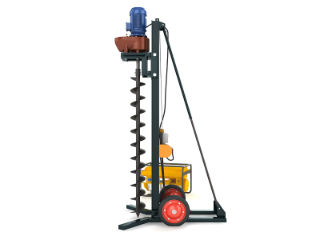 However, auger drilling, which is the most inexpensive method of drilling, still used in borehole drilling in the study of Geology for construction. Rotating auger is immersed. The rotation of the tool the soil from the bottom rises to a wellhead and is thrown to the surface. A geologist can record the change of soil in the bottom of the sink rate of the auger and the soil particles reaching the surface. After extraction of the auger to the surface and the Stripping knife of the captured screw of the ground you can see the changing of the layers on the screw. By measuring the length of the screw to the border shifts of soil layers, it is possible to determine the depth of the soles of the top layer and the underlying roof.

drilling of wells allows to take samples of soil disturbed structure. For such samples it is possible to determine the following characteristics:

Completing the boring of the bore by the screw, it is possible to accurately determine the position of the boundaries between layers of different density. So well in Donetsk region to survey for the construction of the shops can be performed with the use of auger drilling across the upper clay strata. Upon reaching the roof shale transition in core drilling. This method of tunneling excavations in this region is very effective.

Drilling auger is useful when you need to make the leader of the well to a certain depth, for example, for installation in wells of the fence posts. As the depth of frost penetration in many regions is more than 1 meter, and the pillars of modern concrete fences are immersed to a depth exceeding 1 meter. This is done to prevent the impact forces of frost heaving.

Efficient is the drilling of water wells.

Exploration of the Cretaceous rocks, by assuming the samples of disturbed structure, determine the percentage of various substances, moisture, sand content, which allows to determine the suitability of chalk to use. Also auger drilling is used for drilling leader wells under the Foundation piles.