Drilling for engineering-geological surveys  defines the structure of rocks, the layers are separated, determines the composition of rocks, properties of the groundwater samples are collected, documented core. Drilled wells up to ten meters are considered small, up to thirty – shallow. Churn-drilling is characterized by the destruction of the ground by a blow of the tip. The cleaved mass shall be made by the Cup or bailer. 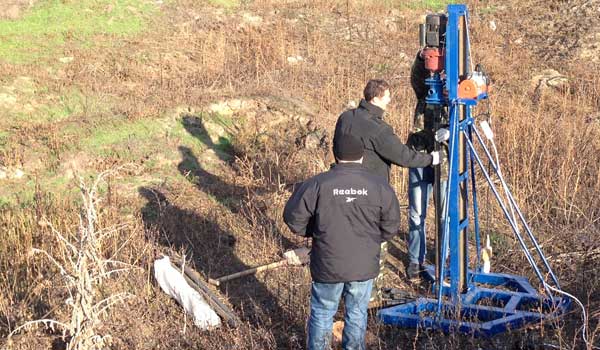 Churn-drilling ring face is used in sand, clay, dry or poorly irrigated, plastic sediments. Another type is the so-called pecking, when the tool hits and then lifted. This form is used when magkoelasticna soils, collapsible soil, loess. The maximum depth in this way - 15m. This species is the most suitable when contained in precipitation are not so many large inclusions, when sandy loam in varying degrees hydrated. In order to select the monolith sampler is driven into the rock. Even from the loam lesopilnyh selected monoliths are quite reasonable – because when driving does not significantly change the properties of soil like density, settling, and other indicators.

Advantages of shock-cable drilling when using the bottom ring is the least energy intensive, least metal of all kinds in engineering Geology. Per shift one drilling crew can drill up to thirty-five linear feet. Churn-drilling using longwall mining is used in rocks with inclusions of large fragments, in sandy irrigated, unsaturated sediments. Drilling is performed using drill bits or jelonek. The bailer dump bottom until it fills liquefied mass. When there are very wet Sands, the borehole wall fixed by casing pipe. The advantages of cable-churn drilling in that the aquifers are open without the use of a drilling mud. In this species, there are also drawbacks – low speed of passage of the layers of the soil, spent a lot of tubing, poor transportability, high cost. The benefits should include the fact that clearly establishes the level of groundwater, sampled water samples without the impurities, well documented even small layers of rocks. Minor the speed of the layers can be increased by careful optimization of labor.

The way of drilling, drilling equipment is constantly improving, constantly being upgraded. The proven control unit for research in engineering Geology is now PBW. It can be installed on different trucks, tracked vehicles, sleds, etc. Can work in all weather conditions. Length of rope – 60 meters. The winch is not in use, when the casing unnecessary. The capacity of the VU – 1.6 tons. Drilling with augers up to 60 meters. When you work with washing – up to 120 meters, blow – up to 100 meters. Besides using machines: UGB-S, LBU-50, AVB-2M, FSM-15M, BULIT-15, UBR-2M. The well deepens as the glass is hammered with valve or without it. The drilling process using longwall mining is done by machines: UGB-UK, UGB-US. Drilling rig LBU-50 can also be used a rotational method of deepening. It is possible to use also in hydrogeology, with the passage of the pit. The maximum you can go 50m, during the sinking of the pit – 20m.

Churn-drilling for engineering-geological surveys  in certain situations, it may be optimal when using the most compact of drilling rigs AVB~2M. Has a large capacity at a low weight. Very good performance speeds, performance. Can operate on very solid ground. Working depth up to forty meters.

In Order to choose the best place for your home, choose the right Foundation, the depth of its foundations – you can make an application to the Geology in the firm LLC "Guild Engineering".