Guild Engineering will help align the roll of chimneys and comprehensive inspection of chimneys, the definition of the roll, the Geology of the soil under the Foundation, the alignment of the pipes according to the project, as well as:

Valid roll chimney of a height of 80 meters 1 meters. 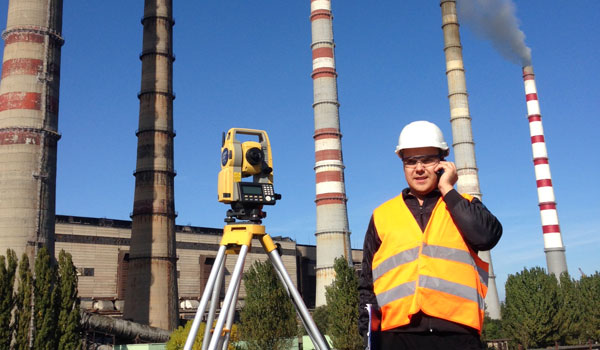 chimney is an integral component of any industrial plant or other industrial facilities. It may be different in height and material used for its production. The main condition for the functioning of reliability and security. So these two criteria are respected, it is necessary to conduct appropriate surveying procedures. Examination of the chimney will show all its strengths and weaknesses.

the First indication of the correct position chimney like any other high object is its flatness, the vertical position(center of the lower section must match the coordinates with the center of the top section). Naturally, a certain amount of roll Pets, but this small, and exceeding it says about human functioning design and insecurity.

to align the roll chimneys you can install it by checking. Check the verticality is also surveying procedure which requires special devices - optical, speedlinking. Such test work should be carried out not once, but periodically, to be able in time to align, if it is needed. According to the results of audits, it is necessary, a report outlining all reported metrics and reporting standards.

if the surveyors have already installed the roll, it should be eliminated. For this there are several ways, each of which is individually tailored for a specific case. The choice of method is influenced by such indicators as the nature of the pipe and its grounds and reasons of the roll and its degree.

if the reason is the drawdown or other changes in the base of the pipe, it is necessary to direct the efforts on this area and strengthen the Foundation. To do this, the plan project. This is a very complicated and expensive process, but it is necessary because of a possible increase of the roll and the complete destruction of the structure, which is a threat to the safety of workers.

On the roll can be affected by errors during the construction of the pipe or its improper use. In this case it is necessary to assess the degree of deviation from the norm. There are situations when the roll is so strong that standard methods will not fit, and you need to take radical measures to strengthen the barrel of the pipe. If it's not all bad, you may find the following methods: drilling of the soil and its notch in the required amount on the same side of the Foundation, which is the opposite roll or soaking the grounds on this side; attaching a support metal plates, blades. By the way, the last option is the easiest, however, is only suitable for metal structures.

The most popular way of leveling roll of chimneys, as well as the most simple, is a strip of metal plates under the base plate. Such work is carried out only under the geodetic supervision. They are carried out as follows: initially you should loosen the bolts and the base plate on the Foundation, which is fixed, and then under her humour metal plate. thus, the base plate together with the barrel of the pipe a little bit raised.

The company "GUILD ENGINEERING" performs surveying work to ponabludali tilt tubes for determining the angular and linear parameters of the roll structures. From experience I can say that on a decent industrial enterprises, such as Interpipe, Datek, Metinvest, the DMK and the like, allow the rolls are high pipes up to 1 m in plan, with a height of 70 meters, which is in the corner indicators will be 45’. The package of measures is usually such as demolition and laying brick anew somewhere with half pipes, reinforcement of the Foundation drilling of boreholes and pumping concrete under them, arrangements for the drainage of groundwater and installation of pavings for efficient inference in rainfall, geological surveys for understanding the water content of gruntov. But if the roll of the chimney is more than 0.5, such pipes are subject to more rigorous and regular geodetic monitoring at least 1 time per month.

Any of these works must be carried out exclusively by professional surveyors, such as employees of the Engineering Guild. Only skilled craftsmen know which way would be the right one, and will be able to return pipe vertical position, and consequently, reliability, security and performance.